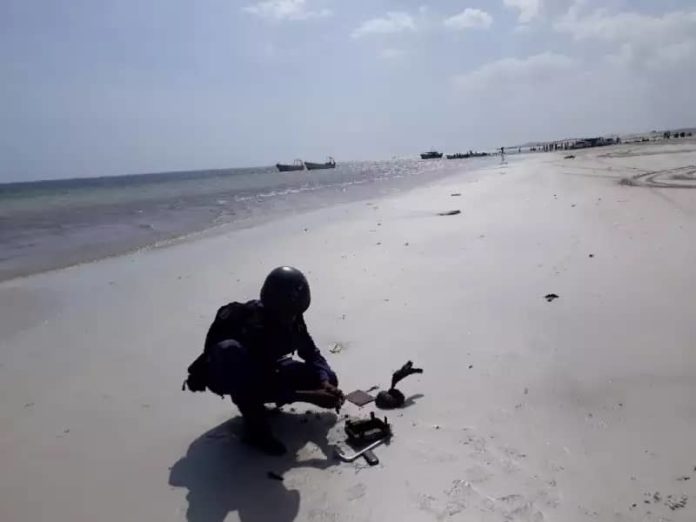 It is estimated that many explosive remnants of war (ERWs), which include unexploded ordnance (UXOs), exist across Somalia, including Mogadishu, putting communities in danger. UXOs and ERWs can be un-detonated grenades, mortars, missiles, rockets and other unexploded devices resulting from conflict that can lie unnoticed in the ground. It is estimated that the majority of casualties from ERWs globally are civilians and often children are most affected.

The Somali Police Force (SPF) Explosive Ordinance Department (EOD) works to locate, map, and destroy UXOs and ERWs and protect communities across Somalia. The Director of the SPF EOD, Major Asad Abdalla Said, said he and his colleagues’ main aim is to build police EOD teams that can work together with partners to ensure safe and secure environments for Somali people, so that they can be free of the dangers of explosives.  But he says that up to now they often didn’t have the right equipment to share information on what they found quickly.

“When we get call outs, the local district police will cordon off the area and then the SPF EOD team will do their work. We try to collect the evidence and data, and then hand over to our colleagues in the Criminal Investigation Department. But this process can be slow and due to lack of equipment we often couldn’t fully capture all the evidence,” he said.

Police advisor Daniela Miteva works with the European Union Capacity Building Mission in Somalia (EUCAP Somalia), and provides capacity support to the SPF EOD, as well as support to the INTERPOL National Central Bureau (NCB) within the SPF.  She says that a lot of work has been done by the international community to support the Somali police in clearing dangerous UXOs and ERWs.

“UNMAS (United Nations Mine Action Service) and other organisations have done an outstanding job in Somalia by providing specialised training and supporting the clearing of many areas in Mogadishu. The U.S. has also provided specialised protection equipment and thanks to that the EOD police officers can carry out their job much more safely and efficiently.”

She says though that the SPF EOD requested further coordination support to carry out their work. “At the request of the SPF, EUCAP Somalia has been working to improve the information exchange between the EOD and the INTERPOL NCB as well as international agencies, on analysis of explosive components and tracking individuals involved in the manufacture of explosive devices,” she said.

As part of this support the EU mission provided non-specialised equipment such as computers, office furniture, and in particular, smartphones with GPS tracking and mapping.

“The smartphones we handed over to each SPF EOD team in Mogadishu have an app that has mapping grids for locating UXOs, photographing them and sharing that information with partners. It’s a simple idea, but very efficient and makes gathering information at an IED (improvised explosive device) incident site or mapping UXOs much faster,” Miteva said.

“It has very quickly improved coordination with international partners and INTERPOL, and now means that as well as keeping communities safe, the Somali police can also contribute further to international police work against organised crime and terrorism,” she said.

The EU Capacity Building Mission in Somalia is part of the EU’s commitment to supporting partner countries on crisis management, conflict prevention and security, under the EU Common Security and Defence Policy (CSDP). As a CSDP mission EUCAP provides advisory support to Somali authorities on rule of law, police development, and maritime security.