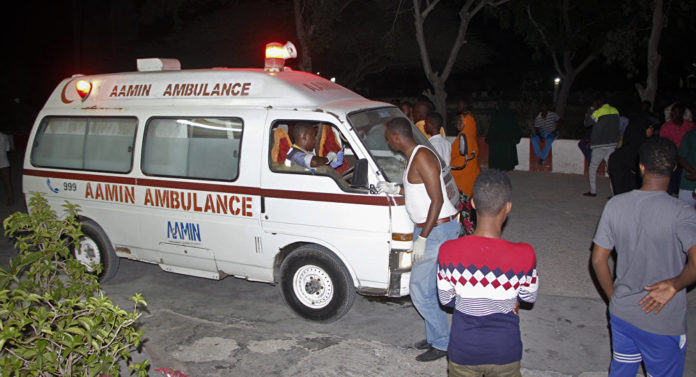 Two explosions near the presidential palace in Somalia’s capital have killed at least 15 people, including a prominent journalist.

Witnesses said the first blast was caused by a car bomb at a security check point near the national theater, where a thick white smoke was seen rising into the sky.

Security official said the explosion killed mostly security forces and civilians. Among those killed in the first attack is Awil Dahir Salad, a prominent Somali journalist who works for the London-based Universal TV. Dahir was the anchor of popular TV show “Dood Wadaag.” At least two other staffers of the TV station were among the dead.

VOA Somali service’s Harun Maruf, who had known Salad for over 25 years, said “This is a very sad day. Somalia has lost a great journalist . . . and a wonderful person.”

Witnesses say more than 31 other people are reported to have been wounded in the first blast.

“We have carried 5 dead people and 14 others injured from the first blast” an official with Mogadishu’s Amin Ambulance told VOA.

Somali Red Crescent told a local VOA reporter that also they carried from the scene ten dead bodies and 17 others wounded from the blast.

A security official told VOA among those wounded were Warsame Mohamed Jodah, a Somali lawmaker and Abdullahi Mohamed Tuulah, the deputy mayor of Mogdishu.

The second explosion occurred nearby, but it’s unclear what caused it.

The al-Qaida linked group al-Shabab had claimed the responsibility for both blasts. A pro-al-Shabab website said the second blast was a car bomb that targeted those who had responded to the first blast.

Somalia’s national intelligence agency said the driver of the second car and a man who was coordinating the attacks were arrested.