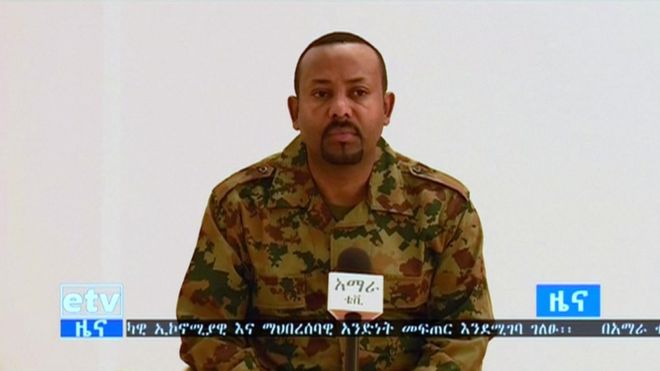 An Ethiopian official said no fewer than 13 security personnel working for opposing sides died from injuries during the failed coup attempt to overthrow the governance structure of Ethiopia’s populous Amhara regional state.

He also disclosed that seven other suspected members of the hidden team that orchestrated the coup have been also confirmed dead so far.

Mr Adamu said the regional security apparatus, working in partnership with the federal government, has so far arrested four senior regional officials as part of an ongoing high-level investigation into the coup attempt.

Among the four high-level suspects is Tefera Mamo, a brigadier general and head of Amhara region’s special forces, the regional police commissioner revealed.

Mr Adamu also said the coup attempt was orchestrated by Asaminew Tsige, who was the intelligence and security chief of the Amhara regional state.

Ethiopian Federal Police Commissioner, Endashw Tasew, also told a news conference in the capital Addis Ababa that the Ethiopian government has intensified the large-scale crackdown on the organised coup attempt.

According to the Ethiopian government, the Chief of Staff of the Ethiopian defence forces, Seare Mekonnen, was among the five senior regional and federal government officials confirmed dead.

Also from the gunshot injuries include, Migbaru Kebede, Attorney General of the Amhara regional state, Ezez Wassie, who was an advisor to the Amhara region’s president, as well as Geza’e Abera, a retired major general and former senior official in the Ethiopian army, the Ethiopian government confirmed Sunday.

While three of the regional government officials were killed in the Amhara regional state’s capital Bahir Dar, some 570 km from the capital Addis Ababa.

The Ethiopian army chief and Mr Abera were killed in an attack in the capital Addis Ababa, the Ethiopian Prime Minister Abiy Ahmed disclosed in a statement.

“The two attacks in Bahir Dar and Addis Ababa were part of a highly coordinated mission led and masterminded by Brig.-Gen. Asaminew Tsige,” Mr Tasew said.

Mr Tasew also said if the federal and regional security apparatuses could not contain the coup attempt on time it would have triggered serious damages to the country’s overall stability.