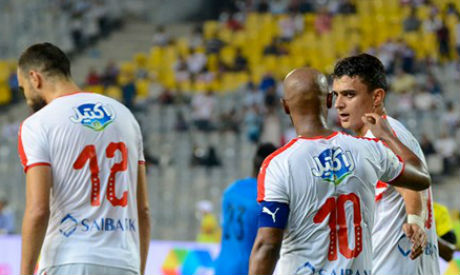 Egypt’s Zamalek marked the debut of Serbian coach Milutin ‘Micho’ Sredojevic with a 6-0 victory over Somalia’s Dekedaha to complete an emphatic 13-0 aggregate victory and reach the African Champions League second round on Saturday.

Striker Mostafa Mohamed and veteran winger Mahmoud Shikabala, a fan favourite who returned to his boyhood club in the summer, scored twice apiece as Zamalek once again toyed with their helpless opponents following a 7-0 first-leg win.

Although Zamalek’s progress was guaranteed, Micho was restless on the touchline, passionately conveying his instructions as the Cairo giants were slow in the first half.

Mostafa, back to Zamalek following a fruitful loan spell at Talae El-Gaish, scored in the first leg and was on target again on Saturday when he chipped the ball over the keeper after a threaded pass from new recruit Achraf Bencharki on 25 minutes.

Zamalek wasted several goal-scoring chances to increase their lead in the first half but came out with all guns glazing in the second, with Mostafa making it 2-0 in the 52nd minute with a free far-post header following an inviting cross from left winger Abdallah Gomaa.

Shikabala then stole the show, cutting inside his marker to drill a low shot home before adding the fourth with a right-foot volley in the 73rd minute.

Central defender Mahmoud Alaa had a penalty saved by the keeper but the referee pointed to the spot again when Bencharki was tripped as he attempted to bury home the rebound. Alaa made no mistake on the second attempt.

Defensive midfielder Mahmoud Abdel-Aziz completed the rout five minutes from time with a dipping shot from the edge of the area.