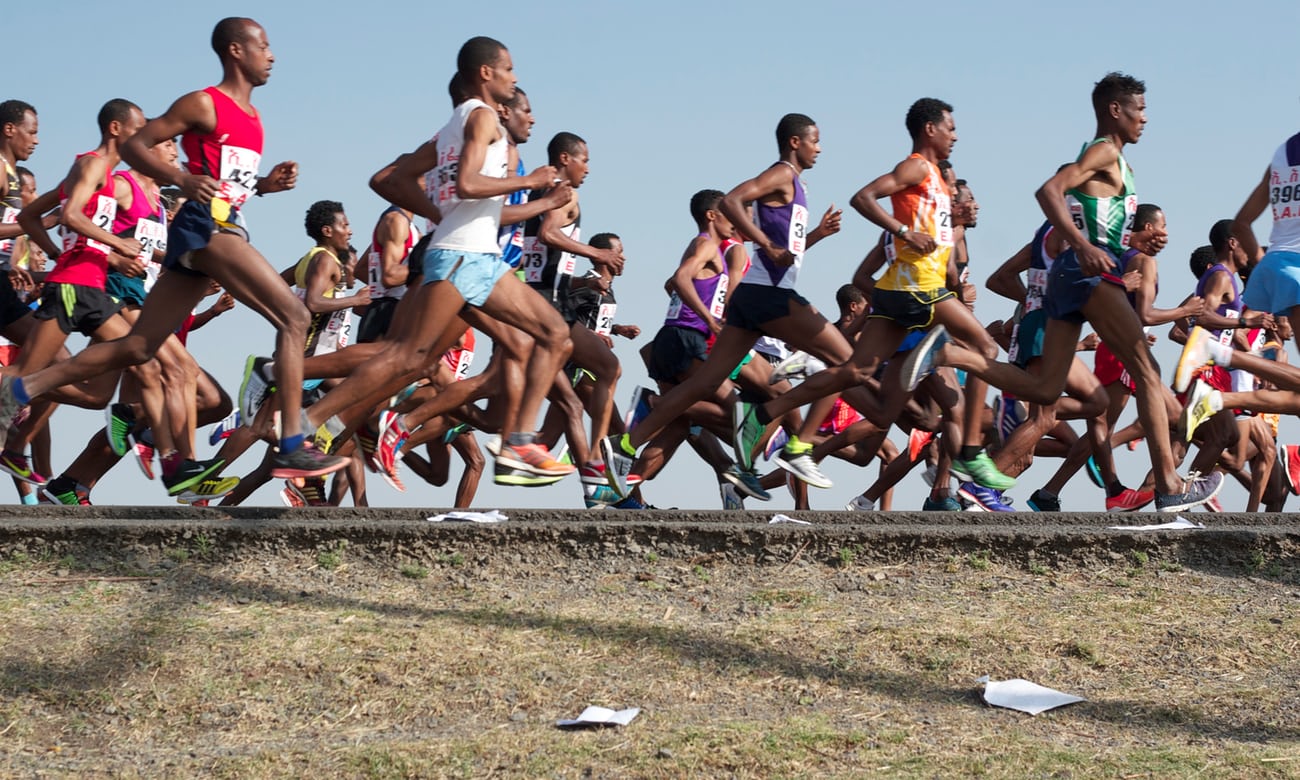 The strong record of the country’s athletes is often attributed to these factors, but hard work, planning and creativity play a key role 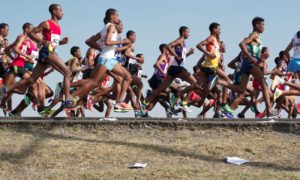 It is 3.15am and I have just woken from a fitful four-hour sleep. I am already wearing running shorts and I quickly pull on a T-shirt and step outside. It is pitch black and my breath turns to mist in the cold air. Fasil is washing his face at the outdoor tap. He has a night off his job guarding a half-constructed building and is staying with Hailye. He beams, clearly surprised that I kept my word about joining them for this session. “Ante farenj aydellum,” he says. “Jegenna neh”; you’re no foreigner, you’re a hero.

We jog slowly to Kidane Mehret church and down the asphalt hill in silence before Hailye turns, crosses himself and leads our first run up the hill. The only light comes from the occasional bare bulb hanging outside a kiosk. By the seventh or eighth rep, I have learned that the hilltop comes faster if you watch your feet, not the summit. After an hour, Hailye stops. “Buka,” he says. Enough. As we jog home, he tells me: “Now you should have a cold shower outside and then you should sleep. That’s going to be the most wonderful sleep.”

He was not wrong. This training session was the start of the time – six months or so after starting fieldwork with Ethiopian long-distance runners in Addis Ababa – when Fasil started telling me I was habesha, a term denoting unified, proud Ethiopia. He joked that, when I came back to the UK, I would be able to run races and say: ‘Ciao farenj,’ at the beginning – “Bye-bye foreigners” – and win easily. “Ciao farenj” became something of a catchphrase every time we did a good training session. So, what is specifically Ethiopian about running up and down a hill at three o’clock in the morning?

Ethiopian (and Kenyan) running success is normally explained deterministically as originating in genetics and altitude (by sports scientists) or as a result of abject poverty. In fact, as was often explained to me, it was impossible for the poorest people to try to become runners, because they were unable to devote the necessary time to rest or eat good enough food. Our barber in Addis – who had tried to make it as a runner for a few years – said: “The problem of Ethiopians is lack of money,” before adding: ‘If there was money, everybody would run.”

The runners I lived and trained with did not believe in talent. They believed in “adaptation”, that anyone could learn to “follow the feet” of other runners, given enough time and the right disposition. They spent hours planning training sessions, seeking the right combination of environment and company for the maximum benefit. They were constantly weighing the value of various places: the “heaviness” of the air at Mount Entoto against the expanses of grassland in Sendafa where the “kilometres come easily”. The chill of the forest against the heat of Akaki, some 800 metres lower. It was not unusual for us to sit in a bus for two hours to get to training and take four hours to struggle home again. If the environment was a factor in their success, it was not a passive “natural” advantage – runners’ engagement with their environment was active and creative.

Conversations on the relative merits of locations could go on for hours. On one occasion, I woke up on Saturday morning to find Teklemariam – who lived 20km away in Legetafo – vigorously washing his face at the outdoor tap in our compound. “What are you doing here?” I asked him, bleary-eyed at 5.45am. “I came for the hill,” he said, before adding reverentially: “It is Tirunesh’s hill,” explaining that it was where the Olympic 5,000-metre and 10,000-metre gold medallist Tirunesh Dibaba used to train.

Places are often imbued with importance because of the people who train, or trained, there. Entoto, for instance, is associated with Haile Gebrselassie, whom I was told repeatedly used to run there every morning at 5.30am. Others are significant for particular air qualities. One area of the forest was referred to as Boston, a marathon renowned for being cold, because it felt colder than other parts of the forest and because runners often trained there when they prepared for Boston marathon. The area of forest we often ran in on “easy” days was known as Arat Shi, which translates as “4,000”. I was told that this was the altitude, although it was closer to 2,500 metres.

Part of the reason why Hailye decided that he needed to run up and down the hill in the night was because he felt that his training had become too “comfortable”. He wanted to remind himself of the time before he had access to the team bus, when he was living on 200 birr (£6) a month. Back then, he had to wake up in the night – when there were fewer cars and people on the streets – and train in the city. Getting up at 3am was tied to a memory of poverty and wanting to do justice to his past self.

Another time, when he was suffering from typhoid, he still insisted on running in the forest. He put on two tracksuits in spite of the temperature being in the mid-20s, to “encourage sweat”. We walked slowly up the hill. “Are you sure this is a good idea?” I asked him. “It is always better to run than to sleep,” he said. ‘[Cristiano] Ronaldo will not play if he has a cold. [Gareth] Bale will not play. They will rest. Farenj will all rest, but habesha will work.”

Several times he came to a stop, crouching and holding his forehead and complaining of dizziness. In spite of repeated entreaties to go home, he kept running, saying: “I have to struggle, I have to face it.” Running through an illness – usually with a clove of garlic up each nostril – was often portrayed as making you stronger, an attitude very much at odds with the medical viewpoint. Demonstrating a willingness to suffer and to continue without complaint was part of building “condition”.

A dominant discourse in sports science for elite endurance athletes – made famous by the Team Sky cycling team – is “marginal gains”. Examples include the team taking their own mattresses to races to ensure a good night’s sleep, or a nutritionist delivering meals to athletes’ houses. Ethiopian runners, too, place huge emphasis on rest. I was frequently told not to “do laps”, which is how people referred to walking around between training sessions, and to ensure that I slept after morning training.

My friend Fasil would often lead us on runs in the forest that left us scrabbling up almost cliff-like slopes, holding on to tree roots with our hands, or through thorny thickets that left us with bleeding legs and arms. He would also deliberately seek out the places populated most densely by hyenas, laughing and picking up a stone when we encountered one. He explained his choice of route by relating it to the tribulations of a running career more broadly: “Well, you know, it’s the forest. It has ups and downs, you can’t always find a comfortable place. You may face hills unexpectedly. Training is like that. Running is like that, you cannot run and achieve everything at the first attempt; there will be ups and downs before you are successful.”

For Fasil, to deliberately embrace risk like this was to acknowledge the long-odds, winner-takes-all nature of the sport itself. Yet, in other ways, the runners I knew seemed to accept that their results, and their progress, were only partially in their control. As Orthodox Christians, they believed that while they could cultivate a sense of virtuous suffering like that described above, this would only influence God’s plan for them to a certain extent. Asked about a poor race performance, one runner I knew – whom I expected to be upset – merely shrugged and told me that “it was obviously not God’s plan”, before adding: “Maybe if I had won that money I’d have bought a car and died in a car crash. God knows what is good for you.”

‘Training alone is just for health’

The piece of advice that I heard most often from Ethiopian runners was that it was impossible to improve on your own. “Training alone is just for health,” I was told. “To be changed, you must learn from others.” Most runners started out in rural training camps before joining clubs and management groups in the city. Going for a run alone was almost as socially unacceptable as eating alone. Runners usually trained in a line of athletes and often “followed each other’s feet” by running in synchrony, seemingly joined by an invisible thread. Strava devotees will be horrified to hear that even GPS watches are often used communally, borrowed and swapped between members of the training group. The best training sessions were those in which energy was shared equally and everyone was seen as having done their share of the work.

All of this is important because it emphasises the hard work, planning and creativity of Ethiopian runners. In order to join a club, runners have to get through a trial race. One runner described having to line up for a 3,000-metre track race with 80 people. He was told that the club would take the first three and that he should come back next year if he was fourth. He had to go through the same process to get from his local club to a regional one and was only able to move to Addis when he had finished on the podium in the Amhara championships several years later.

The institutional structure of Ethiopian athletics, then, is very advanced. If the UK were to support hundreds of distance runners to train full-time in such a competitive group environment, I expect we would also be a force to be reckoned with in the distance events – and UK Sport would not want that success to be dismissed as a result of poverty or British weather. To explain Ethiopian running success in terms of altitude and poverty is to define it in terms of things that Ethiopia and Ethiopian runners can’t control, which is very unfair indeed.

Michael Crawley is writing a book about Ethiopian running