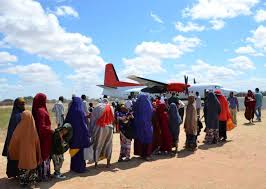 MOGADISHU, May 31 (Xinhua) — The UN refugee agency said Friday it has repatriated about 4,300 Somali refugees from Yemen since the roll-out in 2017 of an assisted spontaneous return (ASR) program.

The exercise which is being facilitated by UNHCR in cooperation with humanitarian partners and authorities in Yemen and Somalia saw a boat carrying 125 Somali refugees depart Aden on Wednesday for Somalia in the latest departure.

“Those who returned home this week include Somalis who had been born in Yemen to refugee parents, and others who were born in Somalia and who fled to Yemen hoping to escape conflict and insecurity,” said the UN refugee agency.

It said the vessel arrived at the Port of Berbera in Somalia on Thursday morning.

UNHCR said the situation for refugees and asylum seekers and migrants has deteriorated significantly in Yemen which is one of the world’s largest humanitarian crises and civilians facing life-threatening conditions,

According to UNHCR, Somali refugees comprise 90 per cent of Yemen’s refugee and asylum seeker population, or some 250,000 people, adding that refugee movements from Somalia to Yemen have been taking place since the 1980s.

UNHCR said an increasing number of refugees have been approaching UNHCR for help in returning home, citing safety and security concerns and limited access to services.

“Thirty-three organized departures have now taken place from Yemen to Somalia since the commencement of the ASR program in 2017,” UNHCR said.