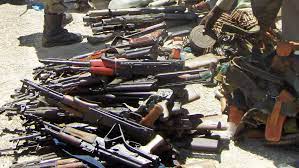 The UN Security Council has strongly condemned the supply of weapons and ammunition to al-shabab extremists and others in Somalia in violation of UN arms embargo.

The UNSC on Monday extended the arms embargo in a vote for another year, saying the al-Qaeda affiliate’s terrorist activities continue to destabilize the Horn of Africa nation.

It called on Somalia’s Federal Government to keep working with financial authorities, private sector financial institutions and the int’l community to crack down on al-shabab’s ability to generate revenue and launder, store and transfer resources” for use in terrorist and other activities.

The council’s resolution also expressed concern at “continued reports of corruption and diversion of public resources in Somalia.”

The vote was 13-0, with Russia and China abstaining.

Russia’s deputy U.N. ambassador, Anna Evstigneeva, said Moscow opposed the reference because “the current state of the relationship between Djibouti and Eritrea doesn’t pose a threat to international peace and security” and “the remaining points of contention between these two countries can be settled through bilateral diplomacy.”
China objected to the council’s failure to modify the arms embargo, as the Somali government has repeatedly requested, to recognize its strides toward reconstruction and assuming responsibility for security in the country.

Only in the past few years has Somalia begun to find its footing after three decades of chaos from warlords to al-Shabab and the emergence of an Islamic State-linked extremist group. This year, a political crisis further postponed long-delayed elections, though they are reportedly moving ahead finally.