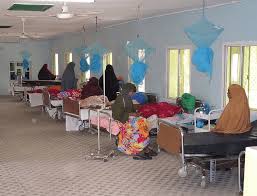 The Horn of Africa, a region often synonymous with conflict and political uncertainty hosts Somaliland, a relatively peaceful breakaway costal region that declared its secession from Somalia in May 1991. [1,2] The collapse of the central government destroyed infrastructure and displaced thousands of civilians forcing a complete breakdown of the national economy. [3] Under subsequent civilian governments and against all odds, Somaliland embarked on a systematic struggle to restore the peace and bring about social and economic rehabilitation forming the foundation for the National Development Plan 2012-2016 and 2017-2021. Although no other country officially recognises its independence, Somaliland has control over its own territory, military, currency, and implements its own public and foreign policies that govern a population of about 3.5 million.

In the country’s quest to become the gateway to the Horn of Africa this democratic nation became the first in the world to use iris scan recognition in their 13 November 2017 presidential election, where they successfully elected their fifth President, Musa Bihi Abdi. Michael Walls, chief observer of the International Election Observation Mission noted: “We are pleased to have observed an election which has seen Somaliland show its democratic spirit, and we congratulate the National Electoral Commission on a well-run poll.” Conversely, Somaliland’s health indicators continue to be some of the worst across the globe. For some, such priorities may pose a disconcerting paradox, but for others this technological development raises hope of the country’s commitment to infrastructure enhancement in other sectors.

Within the developing world, fragile states pose one of the greatest tests to sustainable healthcare globally. [4] In view of the absent UN recognition, Somaliland does not receive direct international funding. Perhaps consequently, this former British protectorate has an economy weaker and more tenuous than in neighbouring countries. Somaliland’s rudimentary healthcare system comprises of a single national referral hospital, a single national mental health hospital, five regional referral hospitals, and three district hospitals. [5] In a region of the globe where being pregnant is a woman’s greatest danger, efforts to stunt infant and maternal mortally is spearheaded by the former first lady, Edna Adan’s community midwife programme, nevertheless, the internationally credited midwife is the first to admit many substantial challenges remain. [6]

Achieving the tenets of the third Sustainable Development Goal (SDG), ensuring healthy lives, and promoting wellbeing for all, is heavily dependent on effective health management strategies. Somaliland is in need of designing new healthcare policies that places management training at the crux of healthcare reform. The country’s dual health system is dominated by the private sector whilst the government owned hospitals are often depicted as disorganised and inefficient. As the country undergoes a political transition the election results set the stage for President-elect Musa Bihi to deliver on his pledge to increase access to administration and management training for healthcare professionals.

Healthcare reform in Somaliland, however, poses unique challenges; its post conflict state and lack of recognition exacerbate its vulnerability and arduous struggle to single-handedly invest in the health of its own people. For the most part, this nation has rebuilt itself from the devastation of the civil war without outside help. On the one hand, images of the anarchic state of social order and violence across South Sudan, Yemen and Somalia are prevalent in the international media, whilst the notable exceptions in Somaliland remain unfamiliar to many.  On the other hand, those who are conversant with Somaliland’s achievements dub it as Africa’s success story. Indeed, Somaliland’s experience can provide lessons in bottom-up grassroots development for the Horn of Africa, but the country now finds itself in an untenable limbo: be the “beacon of hope” in the region without the world’s attention. It cannot exist in this conundrum forever.

The unequivocal call to the UK and the international community has never been stronger. Arguably, the UN member states pledge to universal health coverage and SDGs warrants the international community to examine their engagement in supporting the sustainable and measurable health gains for Somaliland. This young country began its democratic journey towards peace and prosperity through the daily struggle of its own citizens and for the most part has been ignored by the international community. However, to continue to do so will undermine these efforts. As Somaliland muddles through it’s growing stability and relatively smooth transition of power an international role in healthcare reconstruction becomes more apparent. Furthermore, as part of the UKs own commitment to global health in former territories of the British Empire, it is strongly in our national interest to help strengthen Somaliland’s civil society and healthcare institutions through long-term mutually responsible partnerships. With the international gaze so firmly fixed on identifying problems, it is time we did more to recognise and support successes.

Hamdi Issa is a PhD candidate at the Institute of Global Health Innovation, Imperial College London.

Ara Darzi is a surgeon and director of The Institute of Global Health Innovation, established to improve global healthcare through evidence based innovation He was a Labour health minister from 2007-9.

Competing interests: HI and MH: None declared. AD: For a full list of registered interests, see the parliamentary register.