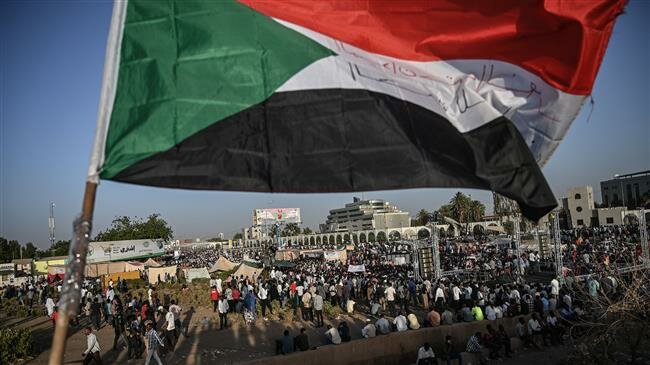 KHARTOUM, Sudan — As Sudan’s uprising gathered steam, people such as Amani Hamid and Bakri Gibril were its vanguard.

But Bashir’s security forces were still battling back until the military stepped in last week to push him aside and take control.

Protest leaders Hamid, 47, from Sudan’s Communist Party, and Gibril, 54, a lawyer and activist, were among those arrested in the waning months of Bashir’s regime and imprisoned without trial.

They were freed as Bashir’s rule collapsed. But instead of rushing home, Hamid and Gibril returned immediately to a new phase of street protests — which have only grown since Bashir’s ouster.

Demonstrators have replaced their disgust for Bashir with distrust for former regime sidekicks who have done little to relinquish their grip on power or share it with civilian representatives.

A banner that reads “Alliance of Freedom and Change” hangs at the entrance to a sit-in area in front of the army headquarters in Khartoum. (Muhammad Salah for The Washington Post) Protesters in Khartoum chant slogans at a recent sit-in. (Muhammad Salah for The Washington Post)

“We, the people of Sudan, have lost our belief in compromise,” said Gibril, who spent more than a year in jail over the course of Bashir’s rule for joining opposition protests. “Compromise now means letting history repeat itself.”

“As of now, it is just another coup,” said Hamid, referring to the military-led group that replaced Bashir.

The protests are now driven by a desire to dismantle a system much larger than just Bashir. In interviews, Hamid and Gibril recounted their imprisonment and mistreatment as a way of describing the repression under Bashir — something they fear could play out again if the current military transitional government is left in control.

Hamid had just returned home from a protest on Jan. 9 when 15 soldiers showed up at her door, carrying her picture. As her nephew tried to block them, she climbed out a window and clambered onto the roof, where she hid while the raid went on below.

Surveillance caught up with her a few days later, she said. Twenty uniformed men showed up this time. One pried her 3-year-old twins from her arms. They took her to the headquarters of the National Intelligence and Security Service, or NISS.

“After an hour of questioning, an official led me out of the room, and I asked, ‘Are you taking me home?’ ” she said. “He laughed a lot at that. ‘No,’ he said, ‘We’re taking you to Shendi Station.’ ”

The infamous Shendi Station detention center is where Hamid and Gibril’s stories briefly overlapped. Hamid spent three hours there before being transferred to a women’s prison. Gibril was kept there for 104 days, in a wing commonly known as the Refrigerator.

“There are more than 50 rooms in the Refrigerator, each of them tiny,” Gibril explained. “Six people minimum in each. No blanket, the lights are always on, the food is beans out of a can every day, and most importantly, the AC is on full blast nonstop. It makes it hard to have thoughts. We used toothpaste they gave us to make a calendar on the wall so that we didn’t lose track of reality.”

Hamid’s room in Omdurman Women’s Prison was similar but without the air conditioning.

“The room had two beds and nine women. The drinking water they gave us was foul. I had diarrhea for the whole 40 days I was there,” she said. Amani Hamid, 47, a protest leader and member of the Communist Party, was detained for 40 days in Omdurman Women’s Prison. (Muhammad Salah for The Washington Post)

Guards in both prisons falsely told detainees that the protests had failed. Hamid believed them and was crestfallen.

Gibril, however, had been in prison repeatedly and knew the telltale sign that the protests weren’t quashed yet.

“We would see more detainees coming all the time, so we knew it was a lie,” he said.

As the number of prisoners rose, so did the tempers of the guards in the Refrigerator, Gibril recalled.

He was made to do things like stand for 12 hours overnight while exhausted, and was beaten during interrogations.

“That was nothing compared with what the Darfuri prisoners got,” he said, referring to people from Sudan’s Darfur region, where Bashir and some members of the military council that deposed him allegedly oversaw a genocide in the mid-2000s.

“A dozen guards would beat just one guy. They called it a ‘party.’ We could hear the screaming and the laughing together from down the hall.” Protesters listen to a speech at a Khartoum sit-in. (Muhammad Salah for The Washington Post)

Back out in the streets, Hamid and Gibril took limited solace in Bashir’s fall from power. Neither of them believe the reports that Bashir is in prison, depriving them of a sense of vengeance, or closure.

“How can Bashir be in prison? The people who could put him there are all implicated in the same crimes,” Gibril said.

“He’s in a comfortable house somewhere,” said Hamid, shaking her head. “If it was left to me, he’d be killed as payback for all his murders. God willing, at least he will be tried in a Sudanese court and locked away.”

As she walked through the main protest site in Khartoum on a recent day, Hamid flashed a huge grin and the peace sign at a group of young women taking selfies to show off the Sudanese flags they’d painted on their cheeks. Around the corner, she ran into a soldier who’d joined the protests early on. They are friends now. The street pulsed with people.

“Everyone needs to stay on the streets, and to stay peaceful,” she said. “I will be there with them.” Family members pose for a selfie at the sit-in in front of the army headquarters. (Muhammad Salah for The Washington Post)
Washington Post