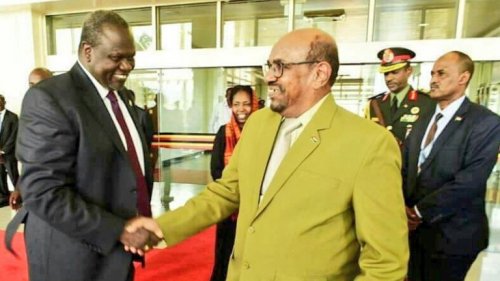 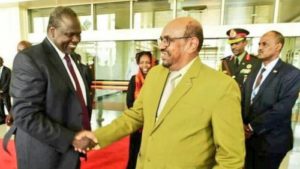 August 30 (KHARTOUM) – The South Sudan Patriotic Movement (SSPM) negotiator disclosed that President Omer al-Bashir advised the opposition groups to initial the final document and pledged to bring their demands to the IGAD leaders.

Stephen Lual Ngor told Sudan Tribune Wednesday that the leader of the SPLM-IO Riek Machar met with President al-Bashir on Tuesday evening to discuss their positions from the final document.

He added that the leader of the opposition alliance (SSOA) Gabriel Changson Chang had to take part in the meeting but he failed to join them due to another meeting with the alliance leaders on the move forward.

According to the SSPM official,lal-Bashir who is the guarantor of the Khartoum Round told Machar that all the concerns raised by the SPLM-IO and the SSOA will be referred to the IGAD leaders who should take a decision on it.

“Al-Bashir stressed that he would exert the necessary efforts in order to ensure that the agreement includes all the parties,” Ngor said.

He said Machar met with the SSOA leaders and delegates and informed them about the outcome of the meeting with al-Bashir.

Also, he disclosed that the opposition leaders would sign the peace agreement on Thursday, adding they have met with the IGAD Special Envoy for South Sudan Wais Ismail to discuss their concerns and reservation.

The opposition negotiator reiterated they are open and ready to continue engaging in the peace process.

The foreign ministry since Tuesday has announced that Machar will sign the peace deal on Thursday.

Pagan Amum, the leader of the SPLM-IDs disapproved the initialling of the document by the head of the group team to the negotiations saying it does not create the necessary conditions for a sustainable peace in South Sudan.

The SSOA, including SSMP and the SPLM DFs called to settle the disagreement over the number of states through the reestablishment of the 10 states but mediators retained the referendum. Also the mediation proposed a compromise it had to withdraw when it was rejected by the government.

Machar raised several matters including the competences of the vice-presidents, the quorum the cabinet and parliament meetings, the constitutional mechanism.

Sources in Khartoum says, al-Bashir, even before the IGAD leaders meeting will discuss the issue with President Salva Kiir in Beijing during the African Chinese summit.