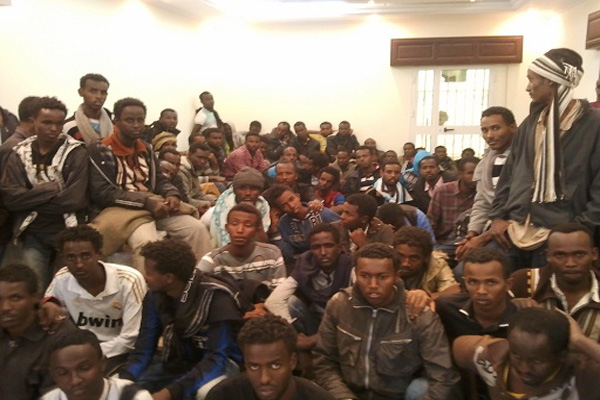 Anab Arab Jibril is one of a growing number of Somaliland parents suffering the financial and emotional burden of trying to free their migrant children from the hands of human traffickers in Libya.

Anab, a mother of six whose 17-year-old daughter made the risky journey to Libya last year,has been reduced to begging in the streets to try to pay off the ransom demands for her daughter’s release.

Three months ago, she sent $3,000 that she had begged and borrowed. But she is still waiting day and night to hear what her daughter’s fate will be.

“My daughter has been held hostage by smugglers on different occasions,” Anab explained to Radio Ergo. “The first time my daughter was tortured and her hand broken. I was informed that the men wanted$8,000 ransom. I sold my piece of land and paid the amount,” recounted Anab,a simple woman who earns her living selling cakes in Burao town.

Anab sold her piece of land to pay the ransom earlier this year, but the smugglers’ demands did not end there. Her daughter was released and then fell into the hands of another group, who demanded a fresh ransom.

This time, Anab had nothing to sell and no savings to meet the new demand, so she started begging in the local markets to raise funds.

“My daughterwas held hostage again. This time theydemanded $1,000 in ransom and $2,000 for boat fees. I started begging in Burao market. Luckily, I paid the money once again after I managed to raise$1,000 from begging andborrowed another $2,000 from relatives,” she said.

Anab said she had last heard that her daughter and other migrants set sail in a boat heading towards Europe, but the boat was turned backed to Libya.

Now she is caught between struggling to pay off debts and agonizing over her daughter’s life and safety.

Abdirahman Farah Ali is another parent whose life has been taken over by the financial and emotional pressures of trying to save a child. His son, Zakariye, 17, left Burao in March 2017, planning to travel onwards to Europe.

According to Abdirahman, Zakariye travelled by boat to Yemen before crossing into Sudan. After a month later Abdirahman received the first call from Zakariye from Yemen,informingthe family that he was on his way to Europe.

“We did not know where he was and were so worried buton 27 Aprilhe finally called us from Yemen. He told us that he needed$1,000 to get to Libya. We mobilized for the money and sent it to him,” said Abdirahman, who works as a broker in Burao livestock market.

However, on reaching Libya, Zakariye fell into the hands of the smugglers.

I sold my house for$4,000. The amount was not enough so I borrowed $4,000 from other people. We sent the money,”Abdirahman told Radio Ergo.

That was not the end of the affair. Zakariye was sold on to another human trafficking group instead of being freedand kept in a cell.

After six months, Abdirahman learnt about this when he was contacted with another demand for $4,000 to free his son.

“This time, a relative gave us a second-hand car to sell to raise the money to pay the demand. I sold the car and sent $4000 to the smugglers.  After that my relative wanted meto pay him back the money for the car,” said Abdirahman.

Despite being heavily indebted,Abdirahman is still supporting his son by sending him$100 dollars a month for food and necessities. He has no house and is unable to pay off his debts.

Mohamed Hamud Elmo, a lecturer at Togdher University in Burao, said youths migrating to Europe have subjected their parents and relatives to immense suffering.

“Without thinking about the consequences, youths from poor families makethese journeys and fall victim to human traffickers, forcing parents to beg or seek loans to save their children,” he said.

According to the academic, the government and the local business community ought to create jobs and opportunities for the young people to discourage them from taking risky journeys overseas.