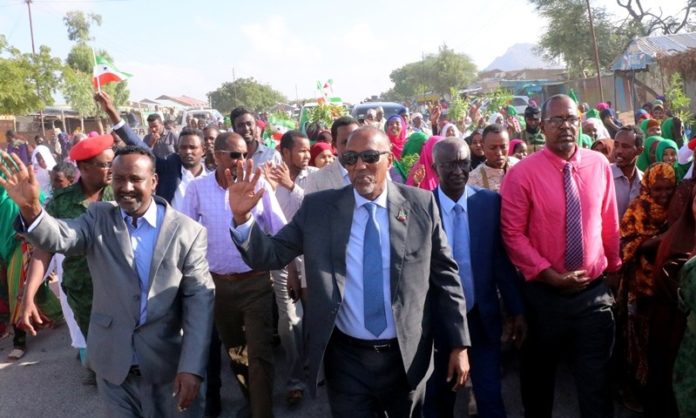 Meet-the-people tour in the eastern parts of the country, a trip that depicted the nation’s reiteration of sticking steadfastly to its justified aspirations

The President H.E. Musa Bihi Abdi was hilariously welcomed back to the city after a fortnight meet-the-people tour in the eastern parts of the country, a trip that depicted the nation’s reiteration of sticking steadfastly to its justified aspirations.

The tumultuous reception that was highlighted with deafening ululations from the members of the public greeted the Head of State at Halaya as his entourage had its convoy coming back to the capital, Hargeisa.

The President took the opportunity to lambast the Mogadishu government President Farmajo for sounding the fact that they were in the process of uniting the whole of Somalis-read Somali-weyn.

The President wondered how a sane mind can live in utopia dreaming in-objectively when situation at hand exhibited or pointed otherwise. He noted that the re-assertion of Somaliland independence was a fore-gone conclusion that was beyond reproach.

He said that the President of Somalia should first focus on stabilizing and uniting his country such that he may worthy to talk to Somalilanders.

He reminded the populace that they had suffered a great deal under the unfortunate union with the south hence has taken to seeing to it that what they aspire to should be fruitful.

He observed that the southerners (Mogadishu government) find it painful to comprehend the fact that when it comes to this country’s national aspirations the people were solidly united and portrayed a national front rallying behind their flag.

He thanked the people for showing such unity and for according him the warm reception.

The Head of State underscored the fact that whereas Somalis can generally share the same culture, religion and language, their politics and aspirations are diverse and by thus Somaliland justifiably runs her cue in such context.

On his part the interior minister noted that the President visited six regions in the eastern parts of the country that depicted the solid unit the country professed.

He welcomed the President back to the city hence praised the locals for presenting such a reception as a strong supportive front.

The President had earlier on spent a couple of days in the port city of Berbera where he saw the inauguration of Abdala stadium hence personally helped roll out the carpet for the stadium.

Before coming to Berbera he visited the Sheikh military academy whereby he addressed the military with words of wisdom that boosted their morale. Generally the president was ushered to each and every centre or town with great happiness and enthusiasm by a happy crowd.

It is no wonder that from his and own personal observation the Head of State quipped with happy reflection at Erigavo, “Such reception is not being accorded to an individual but it indeed depicts the enthusiasm the people have for their nationhood and aspirations”.