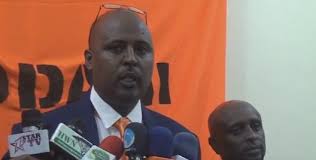 HARGEISA–Somaliland Wadani opposition party has said that they are ready to participate the upcoming election if any date is fixed. The central council leader, Hon. Osman Afgab Nur has repeated the party’s call for the dismissal of the current Election Commission which they have said that they have lost our faith. He asserted that his party won’t participate an election whereby the current electoral commission is overseeing it. Wadani party has accused of Somaliland’s National Electoral Commission (NEC) of committing grave errors in the last presidential polls. Mr. Afyaro has not understood why the incumbent president is siding with NEC at this time as they lost the faith of our party. Mr. Osman, the party’s Executive Committee council leader has stated that the president had to dismiss them as previous presidents disbanded them once they lost faith of the political national parties.