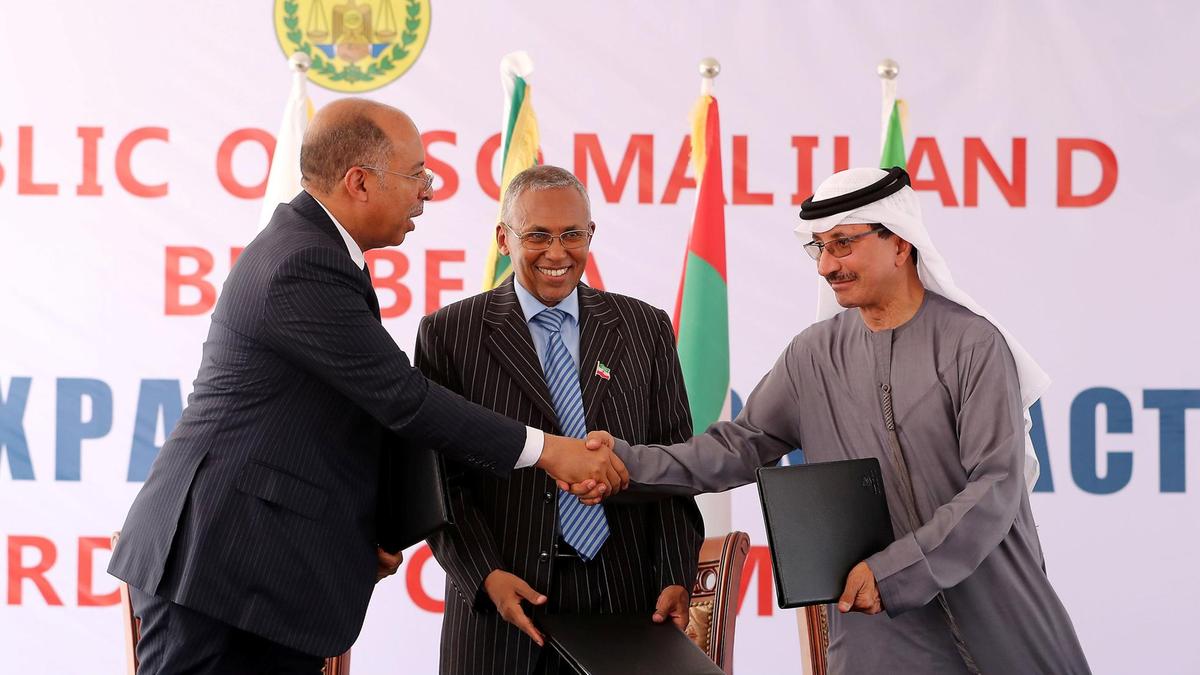 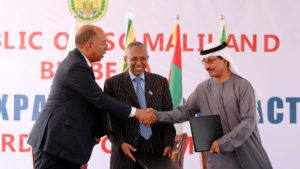 Involved in the expansion project of the Port of Dakar in Senegal as well as the Port of Maputo in Mozambique, Shafa Al Nahda Contracting firm has come to the Horn of Africa this week to seal deal for another important port in the region: Berbera.

During the contract awarding and signing ceremony held on Thursday, both President Musse Bihi Abdi and Sultan Ahmed bin Sulayem, chairman and CEO of DP World Group, have launched the official project for the expansion of Berbera Port.

Back in 2017, following a tripartite agreement entered into amongst the government of Somaliland, Ethiopia and DP World–the Dubai based maritime company—yard expansion project was expected to be completed by 2020 at a cost of USD 101 million.

The first phase of the expansion project will help develop the port yard by 250,000 square meters. The entire investment for the two phases of the project will shell out USD 442 million. Currently, the port handles some 150,000 twenty-foot equivalent units (TEUs –a measure of ships container carrying capacity) and is set to expand to 450,000 TEUs when the first phase expansion is completed.

The total expansion project will bring the capacity of the container yard to handle one million TEU of 20 and 40 foot mixed units. Some of the general cargos the Berbera Port handles include 25,000 tons of food-aids. This volume is expected to climb to 40,000 tons.

Close to 95 percent of the Ethiopia’s global trade currently passes through the Port of Djibouti. The expansion project not only provides port services to Ethiopia but creates supplementary breakthroughs for the small nation of Somaliland in its fight for recognition as an independent state, which Somaliland has been craving for two decades. President Bihi said that Somaliland had maintained independence and sovereignty after a voluntary separation from Somalia more than two decades ago.

However, the project is seen as a threat by Somalia and Djiboutian authorities. Somalia opposed the project claiming it has violated its sovereignty. Asked about Mogadishu’s claims that it does not recognize and has requested for the full revocation of the port development project, president Bihi responded at his palace on Wednesday that, “Somalia can’t interfere in our port development activities. They have no right. We are a sovereign country. We are two states,” the President said.

When asked again how he sees the normalized relations with Ethiopia and Eritrea the possible competition with regard to port businesses as both Assab and Massawa are about to serve the Ethiopian goods, president Bihi said, “We see that as a positive step,” and added that “Ethiopia might require 10 more ports for its growing shipments”. Djibouti also appeared to dislike Berbera Port as it becomes a potential contender taking a considerable share of volume it enjoys at present.

Much uncertainty is out there in countries that have been investing and gearing to invest in port services in the region with regards to the coming of Eritrea and the urgency to utilize both Port Assab and Massawa. It is another interesting turn of events where the details as to how much of the volume of Ethiopia’s shipments are going to be redirected to Eritrea are yet to be clear.

According to the tripartite agreement, DP World holds on to a 51 percent share and Somaliland the 30 percent in the Berbera. Back in 2016, the initial deal was signed between the UAE and Somaliland with the former agreeing to develop and manage the port with its own financial coffers. Somaliland will not be required to contribute in financial terms as the land and the seaport it availed is considered as an investment in kind. However, according to Sultan Ahmed bin Sulayem, each party will contribute based on shares acquired. Hence, Ethiopia as a 19 percent shareholder would be required to invest USD 19.19 million out of the USD 101 million initial development plans.