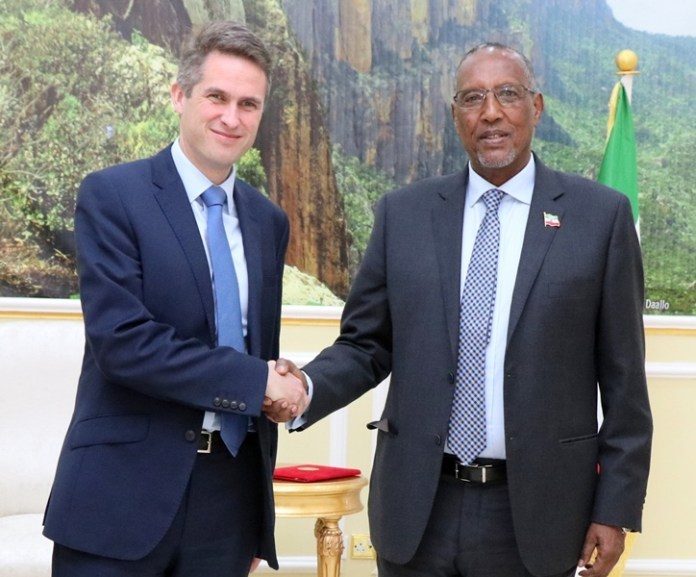 The people of Somaliland really much appreciated this high level official visit of H.E. Gavin Williamson – Secretary for Defense of UK in Hargeisa, Somaliland

Britain, arguably, is the closest friend Somaliland has in the Western Hemisphere without any doubt

During the past 27 years, Somaliland has looked to the United Kingdom for inspiration, development aid and diplomatic backing. United Kingdom, in turn, has viewed Somaliland with special admiration for its successful efforts in pursuing a democratic tradition and its determined struggle to succeed in a region devastated by civil wars, prolonged conflict and lawlessness

Subsequently, there are over 30 members of British parliamentarians who, collectively, Unitedly and jointly lobbies for Somaliland’s recognition as well as looking ways to increase more development aid and political support in British government and beyond

Also In a direct and indirect way, Britain also pushes for Somaliland recognition case in the European Union as well as other international bodies.

Similarly the British also always protects and warns the weak Somali Federal Government and others not intervene Somaliland’s internal and external affairs in which we, the government and the people of Somaliland are very much appreciates their endless efforts

Somaliland has looked to the United Kingdom for inspiration, development aid and diplomatic support. Britain, in turn, has viewed Somaliland with special appreciation for its successful efforts in pursuing a democratic tradition and its determined struggle to succeed in a region devastated by prolonged conflict and lawlessness.

After the recreation, reclaiming and the rebirth of Somaliland in 1991.

Britain has been and is the biggest and largest aid provider, Britain also supports Somaliland democracy and assists the elections economically, British government provided the largest fund to Somaliland Parliamentary elections held in 2005 as well as training and if I am not mistaken, more than half of total aid that comes to Somaliland via international NGOs or international development agencies comes

My advice to Somaliland government and the people of Somaliland is that now the British and the world has now realized that it’s impossible to create the republic of Somalia, so Somaliland should and must take this opportunity to take Somaliland out of isolation.

The Somaliland government’s overall strategy in this relationship should aim at moving Somaliland away from the current isolation by highlighting our selling points. Engaging in international and regional forums will certainly improve Somaliland diplomatic position and carrying out in international stands.

The trouble is not that solutions are difficult to find, but that the world has been rewarding bad behavior for too long while ignoring positive work.

Somaliland should also seek to be seen as a strategic partner in the war against terrorism as we already kept all terrorism at bay and controlled and prevented all piracy in our seas. This will in return bring Somaliland closer to the international community.

The British government can also put more pressure on the International community to be more reasonable and sympathetic in their aid policy towards Somaliland.