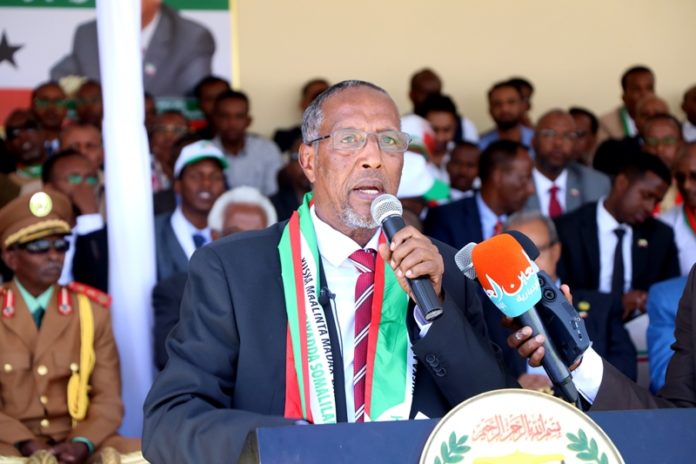 His Excellency Muse Bihi Abdi, the President of the Republic of Somaliland Addresses the Nation

In the Name of Allah, the Most Magnificent and the Most Benevolent

May the Peace, Mercy and Blessings of Allah be Upon You.

Foremost, let me send my heartfelt congratulatory message my fellow Somalilanders all over the world for the commemoration of 28th anniversary of Somaliland Independence Day.

May 18th has a special room in our minds – every Somaliland citizen should express his/her jubilance.

The Republic of Somaliland has ticked all the boxes of statehood; democratically elected government, multi-party system, its own currency, a reasonably effective bureaucracy and a trained army and police force. Since the rebirth of Somaliland, our country has been exercising a good-governance system. Somaliland people are hands in glove, when it comes to the nation building processes, peace building and the reclamation of the independence of this country – 18th May.

Let me outline a few important points that have been achieved during my tenure.

The government has increased the salary of public schools’ teachers.

I believe that the most pertinent determinant that contributes to the development of the country is the youth. Bearing this in mind, I have embarked on a national service comprehensive plan. Currently, 1654 graduates have been recruited. My intention is to supersede youth that have undergone national service program than the others when it comes to job vacancies because they have served for their country.

In terms of gender, I have submitted a bill to the House of Representatives which adopts 18 female contenders as per quota.

Our major resources of income are agriculture, livestock, fishing and industries. The benchmark of the development of this country is the Free Market which is in line with the policies set by Agriculture and Finance Ministries along with the Central Bank.

Taking that into account, the government ponders the comprehensive plan towards the increasing population. Our imperative effort is to improve the social status of our people. Somaliland is the home of 350 000 hectare fertile land; but unfortunately we only use 3% of that vast land. By 2022, 15% of our infertile land will be grown.

Explorations on our resources are underway while preliminary studies show that we have adequate amount of resources that could bring about the development of Somaliland.

As you know inflation has been a great hurdle to our people. The Ministry of Finance, Central Bank and Money Exchange Market have curbed the sky-rocketing inflation. On 18 May, 2018, the inflation rate was 19.2%. The rate has now dropped by 7.7%. The data depicts that Somaliland currency has now risen by 24%. We have also higher expectation on this when the livestock ban is lifted.

Security forces are of paramount importance to the nation at large. The government took salient proceedings towards security forces.

We all know that our national armies sacrifice themselves for the sake of the country. They die in times of clannish vendettas; they die when fighting with perpetrators. Our security forces are committed to combat the country against enemy at all times;thefore, we should standby them. My government will no longer tolerate any perpetration over the peace, vigilance and the tranquility of this nation.

The Republic of Somaliland is willing to hold free and fair elections which in turn fosters our unity. We should always be a democratic country and avoid the clan system. Kulmiye Ruling Party has already fulfilled all the requirements – both budget and legal issues. Kulmiye has also endorsed the national parties on increasing the number of the members of NEC. Moreover, we have concurred with them for the new NEC to hold the elections.

I hereby affirm you that Kulmiye Ruling Party and its government are ready to hold elections on their slated date. Let me laud UCID Party for their commitment in the preparations of election. I urge WADDANI Party to be fully prepared for the upcoming elections.

The foreign policy context of the Republic of Somaliland rests on good neighborhood, mutual respect, socioeconomic integration and the security in general.

We have made efforts over the foreign policy towards this continent, Africa. I hereby assure Africa that the Republic of Somaliland is built on the boundaries demarcated by the colonial powers which is in line with the AU Acts. This country has ticked all the boxes of statehood.

My government has undertaken tangible steps on bolstering the bilateral ties between Somaliland and the International Community. You have seen subsequent delegations and diplomats arriving in Somaliland.

Seemingly, the world has now appreciated the plain difference between Somaliland and Somalia. Somaliland is determined to resolve the issue with in-depth discussion. We always avoid anything that could lead to hostility and animosity.

6.2. Cooperation between the neighboring countries

The role of Somaliland in the geopolitical landscape of the Horn of Africa is laudable. No one can ignore the position of the Republic of Somaliland on the decision making processes of these changes.

More so, this country praises the recruitment of marine forces for the Red Sea. The Republic of Somaliland considers the recently-announced initiative to establish an entity of cooperation, a strategic area and a vital global shipping line, as incomplete without the participation of Somaliland.  As you know, Somaliland has 850-Kilometer territorial water.

To my fellow citizens,

I call on my beloved fellow citizens to tighten their security, bolster their solidarity and combat their nation against enemy. I wish you and your children with a flouring future.