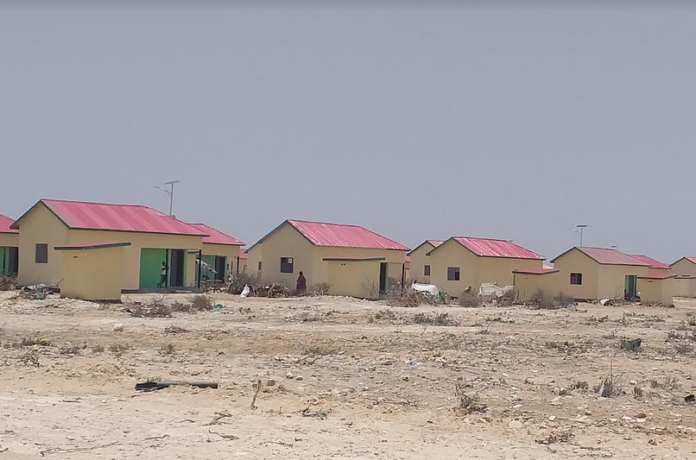 Adan Mohammed Ali never dreamed he would ever escape the poverty that engulfed his family after their herd of 120 goats all perished in the drought in northern Somalia four years ago.

Since moving from their rural home in Las-idleto the large town of Berbera in April 2016, they eked out a living camped in a thatched hut (known as aqal Somali) in a deprived part of the town, were they were dependent on aid handouts.

Last month, however, Adan’s family were among several hundred displaced people who moved into houses built for them by the local authorities.

“We have been living in this new house for 25 days!” Adan told Radio Ergo happily.

He is now able to leave early every morning for Berbera port, where he finds works as a porter, earning around 150 shillings a day, knowing that his family are settled in decent living conditions.

Their new two-bedroom brick house in Magalo Ad, just two kilometres east of Berbera, is a far cry from the harsh life in Jama-Laaye, where they were before. The tin-roofed houses have kitchens and toilets, and essential facilities including water, a health clinic, and a free primary school.

The 156 families who have been rehoused were selected by a lottery held fairly in an open location, with local administration officers and IDPs present.The recipients all moved to Berbera during the harsh drought in 2016-2017 and needed a new start in life.

The mayor of Berbera, Abdi Shakur Mohamed Idin, told Radio Ergo that the houses were built on land donated by the government, and constructed with the support of international NGO, Norwegian Refugee Council.

The mayor said the housing programme has been extended to a second phase in order to accommodate 300 families in total.  The next houses should be ready in about two months.

Hassan Guled Hirsi, a father of eight, said his new house gave him an opportunity to go and look for work, whilst his children enjoyed free education. The family fled the rural village of Darolein 2017, after losing their livestock and livelihood.