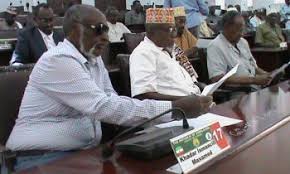 HARGEISA– Members of the Lower House of Parliament are demanding into probe of those who have proposed the Sexual Assault law where clauses that were staunchly against Islamic morals were introduced.

The controversial Rape law sparked an outcry from across the country and the country renowned clerics have spoken against it. An MP by the name of Omar Nur Waye said that all clauses that were removed from the bill has been added later by the Upper house of parliament which is shame to nation of Islam.

Mr. Waye calls on those who have done so to be taken to a court of law so that they will face justice for their nasty actions. He said that if they are Somaliland nationals or aliens they have to be brought to justice for their recklessness. The Lower House of Somaliland parliament have sent a final plea to the Head of State to resubmit the bill so that it will be re-amended and excluded anything that is against Islamic morals.