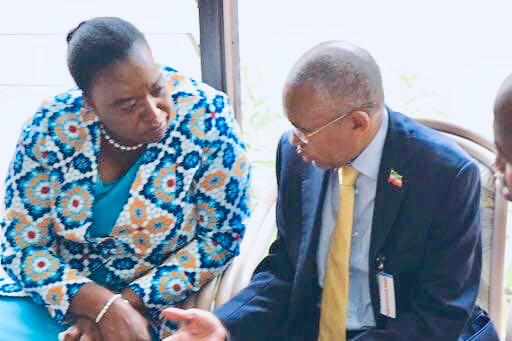 Kenya and Somaliland are exploring ways of working together in the education and agricultural sectors to build their economies.

The foreign ministers of the two countries at the same time have opened discussions on strengthening diplomatic ties with Kenya keen to open up a liaison office in Somaliland capital Hergeisa.

Kenyan foreign minister Monica Juma and her Somaliland counterpart Dr Saad Shire met in Nairobi on October 24 at a function by the United Nations to fete world marathon record holder Eliud Kipchoge who was named the UN Personality of the Year 2018.

During their brief discussion, Dr Saad invited Kenyan investors to explore the opportunities available in Somaliland by investing in different sectors the country.

“We have so many openings for Kenyan investors. We also need to look into how we can work with Kenya in the area of education. We already have Kenyans teaching in our primary and secondary schools and in our universities,” observed the Somaliland minister.

He added: “We are happy to have an embassy operational in Nairobi with a very active envoy who is keen to strengthen ties between the two countries and we are inviting Kenya to set up an embassy in Somaliland.”

Minister Juma said Kenya remains a strong friend to Somaliland and was watching keenly the progress of the country.

There have been plans to have direct flights from Nairobi to Hargeisa with the Kenya Airways sending a delegation to do a feasibility study on the Egal International airport in the Somaliland capital.

There has been pressure from the Kenya business community on the Kenya government to strengthen ties with Somaliland that will open up path for easy trading between the two countries.

Over 15,000 Kenyans are living and working in Somaliland in the hospitality and education sectors.

Somaliland envoy to Kenya Bashe Omar while appreciating the views of the two foreign envoys said improved relations between the two nations will boost their economies.

Bashe added there is so much the two countries are losing out on in terms of trade but added there is a ray of hope with the fresh talks between the two ministers.

“There is so much Kenya can export to Somaliland especially agricultural products while they can also import livestock products,” Bashe said.