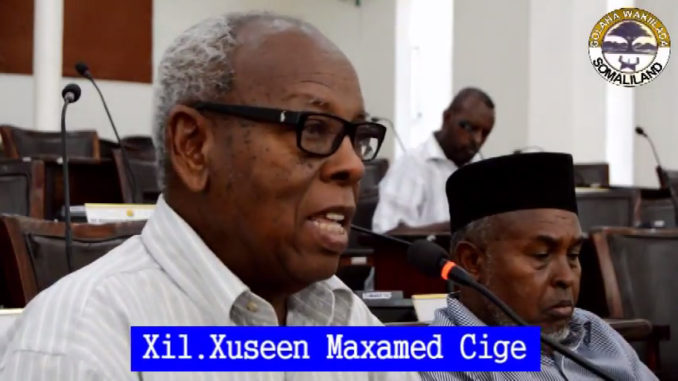 HARGEISA– Lawmaker, Hon. Husein Mohamed Egge has urged members of the house of national assembly to tender resignations and vacate the seats after it is confirmed that parliament and local council elections are not imminent and will be deffered due to an impasse between the three political parties.

The lawmaker has called on current administration to be double its duty on maintaining security in Somaliland.

He warned against the looming of insecurity that may take place in the country.

He said that they have been in the house for 13 years and it seems that they will remain in the seats as elections are supposed to be delayed due to the political parties who are in dispute over the National Electoral Commission which its future hangs on in the balance.

He stated that they have not inherited the seats but called on his fellow MP’s to take a united stand and quit their posts.

The parliamentarian has further added that they have to vacate the seats so that those who are vying for the posts to run for parliament.

He anticiapted that it is for holding parliament election but it is probably clear that elections are likely to be deferred due to standoff over NEC which its future is uncertain.

He said that Somaliland is a democratic country that embraced the multi party politics but further went on to say that having the country established three parties then the two opposition parties have said that they cannot trust NEC to oversee the upcoming parliament election as they accuse of irregularities in the last presidential polls.

The opposition party calls on NEC to be disbanded but the current president is adamant that NEC cannot be dissolved as it has not completed its term.

The parliamentarian has urged the gov’t to heed the gripe from opposition parties as the former Somaliland presidents have changed the National Electoral Commission (NEC) after opposition parties have accused of losing neutrality.

The Somaliland house of National Assembly lawmaker has called on the current gov’t to do all it can to bring the raging war between two brotherly clans in Sool region to an end once an for all.