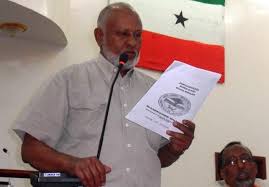 HARGEISA– The deputy speaker of the Upper House of the Parliament (Guurti), Hon.Saeed Jama Ali (Saeed Timo) has refuted claims that the speaker of the House of Elders also known as (Guurti) Hon. Suleiman Mohammud Adam (Suleiman Noor) has tendered his resignation. He added that the House chairman has no reasons whatsoever to resign and called the people circulating the fake news as irresponsible.

The deputy speaker stated that if the speaker had resigned the first person in the know should be him and other members of the senate. Hon. Saeed said that he is very saddened by a cross section of the media who write whatever that comes in their mind they have no sense. “For sure I’m really disturbed buy these people who print news that is not reliable I don’t where they are getting their information. The chairman Hon. Suleiman is on official leave and will be away for a month.

He went on to say that “If the speaker wanted to resign he would do so when he was still in the country before flying abroad. He has no reason to leave office what I’m aware is that he is London and in good health.”

He added that the chairman and all members of the senate will stay until their tenure expires in early 2019.

A local newspaper wrote the news of Hon. Suleiman resignation on the front page this has cause a lot of uncertainties  as his supporters jammed telephone booths to inquire if truly their politician had resigned or not.