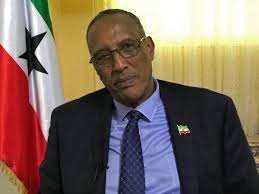 HARGEISA–The President of the Republic of Somaliland, HE Musa Bihi on Saturday announced an order revoking the Lease  of Berbera port Storage facility granted to six private companies.

The former Somaliland president, Ahmed Silanyo allowed the fuel depot to be privatized on 15th of October, 2015 which sparked an outcry from Sahil residents and much across the country.

The president of Somaliland, Bihi has also authorized in a presidential decree that the government has fully retaken the administration of Berbera fuel facility storage.

It is also declared that the government has fully taken control of the management of Egal Int’l Airport Parking Lot and at the same time announced that it has revoked the lease of the airport security which now rests on the shoulders of the government.

The government has apprised the following firms, BOG, SRM and EPASS. which used to run the fuel depot, the airport parking lot and the security if airport that the government has rescinded the lease and from now on will be in the hands of the govt authority.

This has become necessary due to the fact that there is an urgent need for the fuel depot to be operable in order to meet the the interest of the country.  The ministries of trade, finance and development in conjunction with auditor general and the anti corruption commission agency to evaluate and come up with the exact amount of funds that the aforementioned private companies have spent on the development of fuel depot, the airport parking lot and the security. The staffers will continue work as usual.