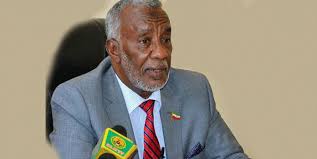 Somaliland Foreign Affairs Minister has claimed that the Coronavirus pandemic which is now prevalent around the globe has affected the country’s search for an international recognition.

The FM Yasin Faraton argues that Somaliland is a de facto state that deserves an int’l recognition from the world.

Mr. Faraton has announced that COVID-19 has put a standstill to the movement of the world as every nation has taken measures aimed at preventing the spread of the Coronavirus pandemic.

The FM has disclosed that Somaliland has a vibrant democracy and is politically mature.

SL’s FM made the above remarks in an interview he gave to local newspaper dubbed “Geeska Afrika’ that is published in Hargeisa on daily day basis.

The FM Yasin Faraton has asserted that there is law and order in Somaliland.

He stressed that Somaliland’s unshakable bonds with the world remains unchanged.

” Somaliland is a member of the world countries. It is a nation that exists and is searching an int’l recognition. The state has shown political maturity while it has embraced a flourishing democracy. Somaliland’s has all government institutions operating and are up and running.” said the FM.