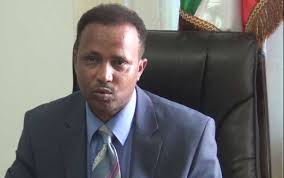 HARGEISA– The Former Health Minster, Hon. Sulieman Haglatosiye has announced that he is no longer a member of Somaliland’s ruling party (Kulmiye) but further pointed out that he is an ordinary citizen.

Mr. Suleiman has refuted that he is vying for the chairmanship of the governing party and gave advice to the renegade colonel Arre and the Head of State. He strongly refuted the news rumors circulated in the media which he termed as baseless and propaganda intended to undermine the public. Mr. Suleiman has further said that he has not publicly announced his intention of throwing his hat into ring and contest for the chairmanship of the party. He also said that he served in the previous government under a ministerial capacity and further added that he is not a member of the current government.

He asserted that since he is an ordinary citizen that he is also tasked to work towards the development and progress of the country. He stated that he will run for the presidency and vice presidency once it is appropriate. He urged the renegade colonel to put forward his gripes to the government and discouraged to take arms. He also called on the Head of State that he must talk to those who have grievances against his leadership.