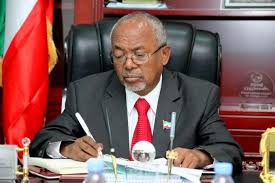 Ruling Party Kulmiye is gearing up to hold its 4th convention next month.

The Deputy President of Somaliland Mr. ABdirahman Sayli has become among the senior officials within the ruling party to have thrown his hat into ring.

VP Sayli has paid up the $10, 000 requirement fee in a bid to vie for the post as the fourth chairman of Kulmiye party.

It is poised that the incumbent Somaliland DP is likely to face a tough challenge from the trade and industry minister, Mohamed Hassan Said Sajin who is thought to be the underdog.

Sajin who is a new comer to Somaliland politics and the ruling Kulmiye party has also paid up the $ 10, 000 fees required to vie for the fourth chairperson.

The duo hail from Awl province.

Sayli the VP has been in the helm of the 4th chairman of ruling party Kulmiye for the past decade.

The interior minister of Somaliland Mohamed Kahin Ahmed is also contesting the deputy chair of the party post which he still retains.

The bid for the party’s chairmanship of the ex-presidential affairs minister in Silanyo’s administration Mahmud Hashi has already announced his candidature.

The incumbent Somaliland Head of State Musa Bihi Abdi is also willing to retrain the post.