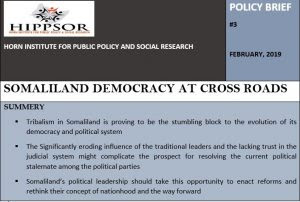 Somaliland, dubbed as an “oasis of peace in an unstable region”, has also recorded significant strides along its journey to electoral democracy compared with any of its neighbors.  Since unilaterally reclaiming independence and retreat from its unity with former Italian Somaliland in May 1991, the people of Somaliland have made every effort to build a democratic country from the rubble of where a security state once stood. Ratifying the constitution through popular referendum, they have also chosen the path of constitutional democracy which resulted in the election, through popular vote, of their presidents, local councilors to devolve power, and the representatives in the lower house. This is not done only once but six times. With the local council elections held in 2002 and 2012.  Presidential elections held in 2003, 2010 and 2017; and House of Representatives held in 2005.   With a long overdue elections of the House of Representatives and district councilors tentatively scheduled to be held by the end of the year of 2019. This journey, however, is not one without its difficulties and many setbacks.

Political Parties and the Challenge of the Tribalism

Multiparty system was introduced in Somaliland in the year of 2002. The intention was and still remains to transition to progressive, democratic and representative institutions that are not based on clan kinship as has been the norm in the traditional Somaliland communities. However, the migration towards political Parties as forums for political representation and competition did not live to that expectation. The major political parties that emerged since are much divided along clan lines rather than on ideologies and programs. For example, Wadani enjoys support mainly in the Habaryounis subclan, UCID with Ciidagale, while Kulmiye draws the bulk of its support from Habar Awal and Habarjeclo subclans.  This shows that the support revolved around the clan identities of the leaders more than any other consideration. Indeed, it is the clan character of political parties that has contributed to the mounting polarization in Somaliland, leading to the tribalism in both the election and post-election politics that became the striking feature of Somaliland politics.

During the 2017 presidential elections, for example, Somalilanders have watched with great concern the politicians revert to clan identities as the bases for the political competition. In consequence, when the voters came out in droves to cast their votes, voting was almost entirely along tribal lines. Consequently, since clans are not predicated on democratic ideas but thrive on the misconception of zero-sum gain the presidential elections resulted in Somaliland that’s, perhaps, more divided along clan lines than ever.

Now, with the new elected government in office more than a year, the elected president has spent most of his time tackling the after-effect of the campaign and concerns on clan equilibrium in the leadership structure rather than on development programs and the many other social problems that should have occupied him.  Thus far, the challenge, to the nascent Somaliland democracy is not the prevalence of diverse clans, but the use of identity politics for self-aggrandizing and to access and maintain power on the part of the politicians.

Many attribute the rise of this “political tribalism” phenomena to the absence of concerted effort to build political parties that compete on ideas. In fact, the tribal practices in the Somaliland political parties has laid bare the absence and the need for strong democratic institutions and Parties that are underpinned  by a search for development ideas—not the appeal to tribal alliances. Therefore, without strong democratic institutions, tribalism shall continue to fill the vacuum derailing the democratic aspirations and endangering, in the process, the hard won stability. Thus far, if Somaliland is to survive, it needs to work towards discovering an identity and institutions that transcend the current blind clan allegiances.

The original mandate of the parliament has been unduly extended many times In Somaliland. The elections have been plagued by delays attributed to technical issues as well as political disputes over the process and timing. The parliamentary election has now been delayed once again until late 2019. Absence of population census and demarcation of constituency borders, as a means to the distribution of seats between the regions, as well as some loopholes in the law has been cited as the major challenge.   Complicating the matter further is the clan influence which has always played a major role in the significance attached to the distribution of the seats.

The regions, in Somaliland, are defacto clan enclaves, making the parliament representation more of a clan representation perceivably reflecting clan size. On the down side, this thinking ignores to account for the mass migration towards the urban centers that has been taking place. Aware of this, two quick fixes that worked in the past may not work this time. Namely, the proportional number of seats allocated conforming to the ones assigned to respective different districts back in the 1960 but corrected to an agreed upon population growth factor; and the high court intervention. More importantly, at that time, the country was prevented from slipping into turmoil by the actions of the traditional leaders who were garnering, then, higher credibility and some diplomatic pressure from the friends of Somaliland. This time around, however, with the influence of the traditional leaders significantly waned and with no much trust in the judicial system, many see that Somaliland faces a critical constitutional and political dilemma exacerbated by cultural crises with no solution in sight.  Never the less, successful negotiation out of this political quagmire  would mark a significant step forward in the evolution of the Somaliland political system, but failure with result potential for  a more authoritarian governance system.

On the current inter party deadlock over the holding and participation of the parliamentary elections, and the credibility of the national elections commission. The root cause can be traced to the 2017 presidential elections. In that election, Muse Bihi was declared the winner with a margin over 10percent over the nearest political contender in an election that was widely ruled, despite minor electoral flaws here and there,  as a free and fair in the international standards, and a major step towards Somaliland democratization efforts. Even so, the opposition parties grudgingly, especially Wadani, accepted the results. Subsequently, the Constitutional court upheld president Bihi’s election victory, clearing the way for the fifth Somaliland president to be sworn in.

Wadani party continued with incessant complaint about the National Elections Commission (NEC), however, implying that they had been disenfranchised by a process that lacked credibility. This is widely interpreted by ruling party as an attack on the legitimacy of the president. Resulting in the ruling party fervently defending the credibility and the efficacy of the NEC citing the commendations of the international elections observers and the civil society. Upping the ante, on their part, the Wadani party casted doubt on their participation in the coming parliamentary and local council election demanding the disbanding of the current NEC and instituting a more “credible” and “representative” one as a condition for their participation.

Need for Rethinking and Broad Reform

HIPPSOR Is an independent research and debate institution dedicated to providing strategic insights and policy solutions pertaining to the region of Horn of Africa.  Our research focus is on economy, energy, security, health, governance, migration and citizenship.