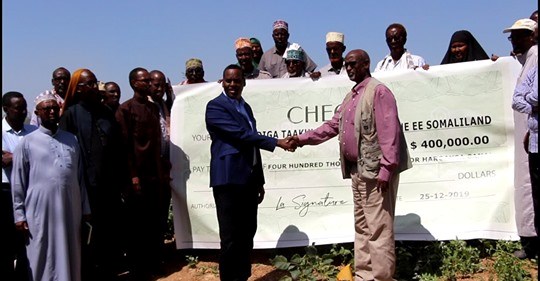 The groundbreaking ceremony was attended by the Hiiraan administration, the Shabelle flooding committee and Somaliland delegation carrying relief aid to flooding victims.

The dam on the flood-prone rive Shabeelle is estimated to cost over seven million U.S dollars.

” We have agreed with the governor of Hiiraan region, the Shabelle relief committee, and traditional leaders to use these funds for protecting the people of Beletwein from flooding. In a feasibility study undertaken by the governor, it was estimated that the project will cost over seven million U.S dollars. The question became who will dare to donate the first patch of funds for the project? It became the privilege of the people of Somaliland to start this project and lay the founding stone today.”Jamal Aideed

Haji Osman Dhagahow the head of Shabelle Relief Committee thanked Somaliland for coming to the relief of Beletwein People. He said they did not expect any less from their brothers in Somaliland.

Ali Mohamed Arale, the governor of Hiiraan region also expressed his gratitude to the people and government of Somaliland.