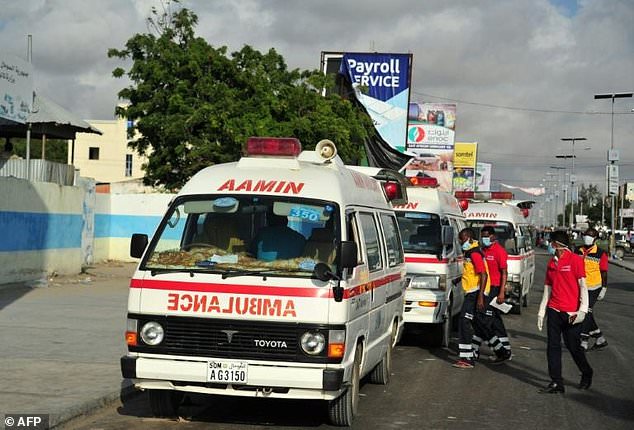 Somali ambulances carrying severely injured patients from a 2017 bomb blast in Mogadishu wait for access to the airport, where military planes are set to fly the wounded to Turkey for treatment

Among the first rescuers rushing to the scene of Somalia’s deadliest truck bombing last year were, as usual, members of the country’s only free ambulance service, Aamin Ambulance.

Founded over a decade ago by a Somali dentist and funded by donations, Aamin Ambulance has become an essential lifeline for ordinary folk, whether victims of armed violence, car accidents or a complicated birth.

Now it is running out of cash.

“This service is what people rely on in times of crisis, but we might have to suspend operations due to financial constraints,” said Abdulkadir Adan, the 45-year-old founder. He blamed escalating running costs as demand for the service has grown.

Adan trained as a dentist in Pakistan and returned in 2006 to Somalia, where he was appalled by the lack of free ambulances in the capital Mogadishu, a city of around two million.

From his Bakara market dental practice he saw “women delivering babies rushed to hospital on a wheelbarrow”.

Inspired by the work of Pakistani philanthropist Abdul Sattar Edhi — whose Edhi Foundation runs a network of free ambulances — Adan spent $4,200 (3,700 euros) of his own money on a converted minibus ambulance.

Today, Aamin has a fleet of 16 ambulances, employs 36 medics, drivers and support staff and costs upwards of $12,000 a month to run.

Funding has come from diaspora Somalis, businessmen and even Adan’s own students at a medical school in the city, who he encourages to donate after lectures.

The ambulances are often among the first on the scene of regular bombings by Al-Qaeda-linked Shabaab militants in Mogadishu which leave hundreds dead and maimed annually.

Following the October 2017 truck bombing that killed over 500 people, donations spiked as a spotlight was thrown on Aamin’s work, but a year on the money is drying up.

“If it was not for the sacrifices made by the team, many people who are alive today would be dead,” said Adan.

“It was the worst day I have witnessed in my life, the most terrible incident,” he said, adding that many of his fellow first responders that day still suffer from nightmares and panic attacks after dragging scores of charred and dismembered bodies from collapsed buildings.

Well-to-do Somalis can afford to hire one of the city’s many commercial ambulance operations, but for the poor Aamin is the only option, filling a gap left by the country’s dysfunctional state.

“If Aamin Ambulance is closed, many Somalis will die,” said 20-year-old Feisal Mohamed Rashid who was rescued from a city bombing last month.

Mohamed Dayib, 32, credits the courage of Aamin workers with his brother’s survival after a bombing last year.

“It will be disaster if this service is no longer there,” he said. “Who is going to rush to the scene of a blast if not Aamin Ambulance?”

Adan has appealed for support and has won some already, but he needs more.

“This service is very important, and because it exists so many lives have been saved,” said Bashir Yusuf, a 42-year-old businessman.

“The private sector is ready to assist,” he said, “but in the long term there needs to be sustainable government funding because in this country, one thing you can be sure of, is a disaster can strike anytime.”