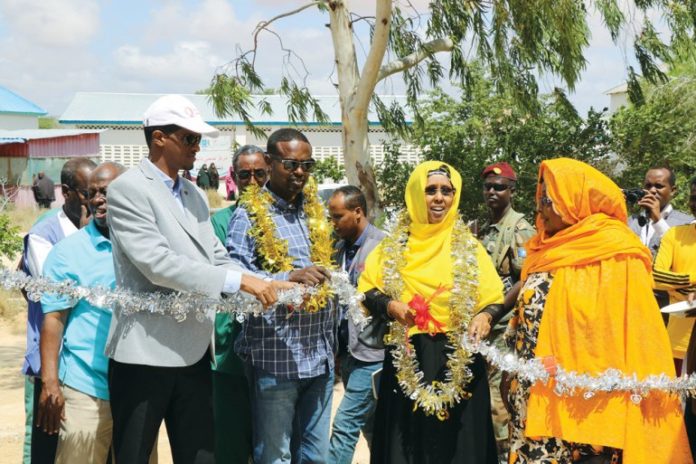 Somalia’s Minister of Health and Social Care, Dr Fawziya Abikar, has praised the Qatari people and government for supporting the Somali people and appreciated Qatar Charity’s initiatives to help vulnerable groups, set up hospitals and health units, and care for mothers and children.
This appreciation by the Minister came during her speech at the opening  of a child and mother care centre established by Qatar Charity in the central hospital of the Denali district of the Somali capital Mogadishu where a large number of the displaced live.
“The establishment of a model child and mother care is very important for Somalia at present, as specialised centres have not been fully operational in most areas after successive crises in the country for nearly three decades,” Abikar said.
Many local officials, a team from the hospital administration, physicians across continents, some dignitaries of the district, and Abdul Nour Haj Ali, director of Qatar Charity office in Somalia were present at the inaugural ceremony.
For his part, Abdul Nour Haj Ali, director of Qatar Charity’s office in Somalia, spoke about the importance of establishing the child and mother care centre that provides health services to the people of the region and neighbouring areas suffering from the lack of basic health and first aid services. He added that this centre came after a survey was carried out to identify the health-related needs of the people in the area, noting that Physicians Across Continents participated in conducting the survey and also contributes to running the center.
Mohammed Abubakar Jafar, an official of the Denali Directorate, praised Qatar Charity’s continuous humanitarian efforts and its relief and development assistance for the Somali society.
The construction of this centre contributes significantly to enhancing the health awareness of the people of the region and providing health services to the residents of the area that houses a significant number of the displaced.
The 600 sq metre centre is expected to provide health care to residents of the area and surrounding areas with a focus on maternal services and childcare. The center including 11 clinics, all designed to provide health services, was built at a total cost of nearly QR400,000. The region has a population of 20,000, mostly children, women and the elderly in IDP camps.