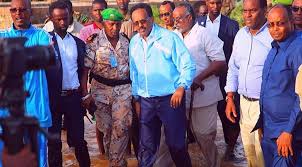 The government of Somalia has been sucked into yet again another suspected scandal which could test its integrity with preliminary reports indicating that $2.6 million meant for mitigation of Beledweyne floods can’t be traced.

Last year, River Shebelle broke its banks causing floods at the Hiran region, which left over 60,000 people displaced and dozens dead. It was one of the worst floods within Somalia in as many years, leading to intervention by the international community in November.

And to help the victims mitigate the aftermath, the People’s Republic of China donated $1.5 million, with yet another $600,000 from neighboring Djibouti. To stand in solidarity with the victims, FGS also promised $0.5 million.

But despite the money being donated ostensibly for helping avert a humanitarian crisis, sources intimate, authorities are yet to handover, seven months after the tragedy, which also destroyed livelihoods among them food crops in the region.

Haji Osman Dhagahow, the chairman of the Beledweyne floods rescue committee, told Voice of America on Friday that the only assistance dispatched to the region by the federal government was 600 sandbags, which were delivered recently.

For several months now, he added, efforts to get answers from the FGS over the unprecedented delay have failed to yield meaningful results, arguing that “nobody is always ready to listen to us”. He did not, however, mention the names of specific officials his committee has been in touch with.

Somali MP Samira Hassan Hoshow told the BBC Somali Service that he was very much “dismayed” by actions of the federal government, adding that the delay was “unjustifiable” since the money was delivered directly to authorities.

“We find it very sad and confusing that financial assistance from other countries, as well as the government’s own pledge, are yet to reach the people [of Beledweyne],” said the MP, condemning the administration for “inefficiency”.

“At the same time, the problem has once again hit us… we will not let this matter rest. We are going to hold the government accountable,” he added, in reference to the recent floods, which have left dozens also displaced.

Abdirahman Abdishakur Warsame, the leader of the Wadajir party, also demanded answers for the missing funds, arguing that it’s the responsibility of every government to be transparent to its people especially on funds given by donors.

“A genuine question: where has this money granted to Somalia by China go? The Beledweyne rescue committee said they haven’t received this grant, the $600k donated by Djibouti, and the government’s $500k pledge for the flood victims in Hiran,” he fired at the government.

Both Djibouti and China closely work with the federal government of Somalia, which has struggled to contain escalating inter-clan conflicts, Al-Shabaab menace, and the latest Coronavirus pandemic.

So far, the virus has infected over 940 people, leaving 44 dead. But in what could be a milestone in the country’s almost dysfunctional healthcare, 106 victims have since been given a clean bill of health, officials said on Friday.

FGS under the leadership of Mohamed Abdullahi Farmajo has been struggling with issues of accountability, especially on funds donated by international partners. Last week, the country arrested top government officials over corruption-related claims.

Although the government did not disclose the amount of money allegedly embezzled by the officers, the Horn of Africa nation has, however, been receiving millions of dollars from international partners among them the US, UN, United Arab Emirates, and Turkey for the fight against the disease.

Previously, international partners particularly the US have frozen funding critical institutions in Somalia among them the Somali National Army [SNA], over opaqueness in management of the funds. However, the ban has since been lifted.

The ongoing rains have been causing mayhem in Somalia, leading to the death of at least six people recently in Puntland. During the floods last year in November, opposition bigwigs Sharif Sheikh Ahmed and Hassan Sheikh Mohamud led nationwide contributions to rescue the victims.