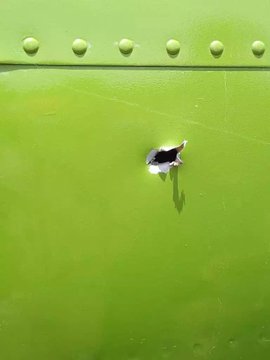 Reports coming from Bay region in Somalia indicate that a plane loaded with humanitarian came under fire while approaching Qansahdhere airfield. Purported pictures show bullet holes in the plane. The incident occurred at 12 noon on Monday. There are no casualties as far as the attack on the plane is concerned. The plane later flew from Qansahdhere airfield and has returned back to Mogadishu, Somalia’s capital. The plane was carrying nutritional food for children and mothers. An officer for SouthWest State pointed al shabab militants may have fired shots on the plane.