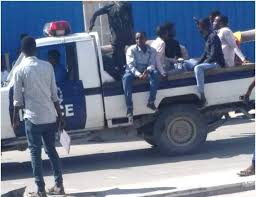 Two people were shot to death by police enforcing the night time curfew due to the outbreak of Covid-19 in Mogadishu on Friday.

A pregnant woman is among the victims that succumbed following police shooting.

Hundreds of demonstrators took to the streets to protest against police following the killing.

Deputy Police Commissioner, General Zakia Hussein, has confirmed that the policeman behind the shooting is arrested.

She said that the police regret the killing of innocent civilians.