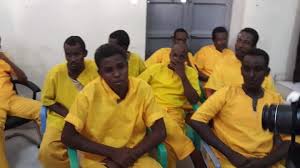 Nugal court in Puntland issued a verdict sentencing three men to death after sexually molesting and killing the 12 years old girl by the name of Aisha Ilyas Aden.

The judge who has presided over the case has exonerated 10 people who were proved innocent and were released from custody.

The three men have raped and later killed the innocent 12 years old girl in Galkayo.

The court hearing has been going on in the township for the past couple of days.

The irony of the case is that two of those convicted of murder are siblings.

The names of those who have been sentenced to death are as follows:-

The court has announced that those who have been convicted have a month to appeal against the sentence.

The sexual assault and the killing of Aisha that transpired two months ago in Galkayo sparked public outcry among the residents.

The hearing of the case were postponed on several occasions after a request from lawyers who were representing the criminals for the case.

Ms. Aisha was later found her body in nearby her residence in Galkayo.