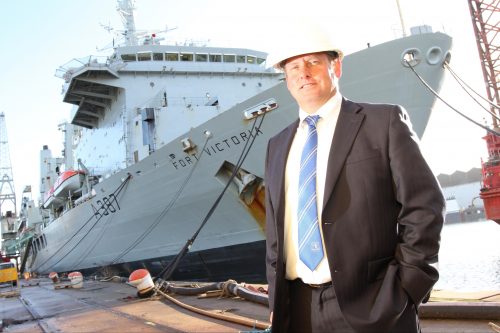 Supply ship Royal Fleet Auxiliary (RFA) Fort Victoria, one of the largest vessels operated by the UK Ministry of Defence, has put to sea following the completion of a £44m refit by Birkenhead-based shipyard Cammell Laird.

The year-long programme of work represented phase two of RFA Fort Victoria’s life extension programme to keep her in service until 2025.

Dubbed ‘Britain’s number one pirate catcher’ after playing a key role in numerous counter-piracy operations off the coast of Somalia, the ship has rejoined the UK’s surface fleet ready to support task group operations alongside aircraft carrier HMS Queen Elizabeth.

The latest upkeep work followed the first refit phase carried out by Cammell Laird in 2014.

It was completed under the Through-Life Support contract held by the Birkenhead shipyard since 2008.

Key projects included adapting the vessel’s cargo tanks to comply with environmental regulations, and adding the capability to re-supply Britain’s new aircraft carriers with provisions while at sea.

Cammell Laird project director, Spencer Atkinson, led both the upkeep projects for the Merseyside shipyard, the two biggest refits the RFA has ever undertaken.

He said the work represented “a monumental achievement” considering the timescale involved.

He added: “We had up to 400 Cammell Laird staff working on RFA Fort Victoria at one point, including upwards of 20 apprentices across all trades.

“Added to that, there were perhaps another 250 to 300 subcontractors.

“It wasn’t possible to complete phase one and two together as the ship would have been out of service for too long, and quite simply, she’s needed around the world.

“The 2014 refurbishment was carried out in such a way that she could sail and be operational, and then come back for the second phase at a later date.

“For the past 10 years, during the lifetime of the Through-Life Support contract, Cammell Laird has been responsible for all maintenance activity on board the ship – major and minor, in the UK and abroad.”

He added: Everyone in the workforce knows Fort Victoria inside out and it’s that learning from experience that saved a lot of time and ultimately ensured value for money for the UK taxpayer.

“The completion of this latest refit will deliver increased operational availability as Fort Victoria is now not only equipped to supply Britain’s new aircraft carriers, but can safely navigate environmentally-protected waters in line with the latest marine regulations.

“In addition, the success and ongoing high performance of Fort Victoria continues to provide valuable lessons for Fleet Solid Support.

“We’ve completed the project within the agreed timescale and budget, and I’m exceptionally proud of what the Cammell Laird team and our key subcontractors, Defence Equipment & Support (DE&S), and RFA ship staff have achieved.”

Critical tasks included upgrading the ship from a single to a double-hull tanker by adapting its centre cargo tanks to comply with international convention for the prevention of pollution from ships (MARPOL) anti-pollution regulations. RFA Fort Victoria will help keep the HMS Queen Elizabeth and HMS Prince of Wales aircraft carriers supplied with solid stores – everything from food to ammunition.

The latest refit was the last major upkeep package to be carried out under the previous RFA Through-Life Support contract. However, Cammell Laird will continue to maintain RFA Fort Victoria along with eight other ships in the RFA flotilla after securing two new 10-year support contracts worth £619m which began in March 2019.