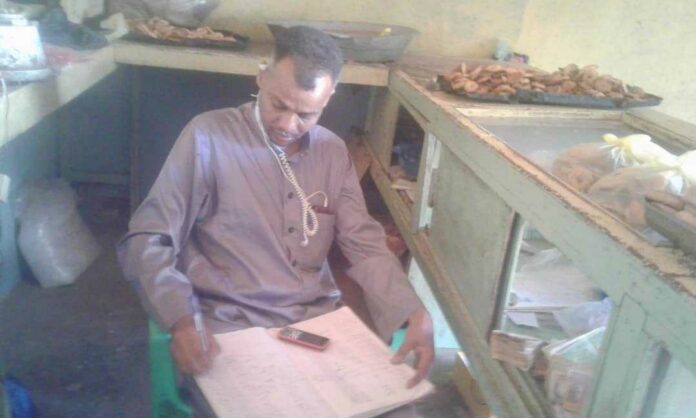 Radio Ergo’s IDP camp series this week explores the hard road to success for two men displaced from their homes respectively by conflict and drought, who set up their own businesses in Buhodle in northern Somalia.

After 12 years living in a shabby IDP camp, Yussuf Omar Mohamed can finally say he is living comfortably as a self-supporting businessman in the northern Somali town of Buhodle.

Yussuf fled conflict in the Somali capital, Mogadishu, and settled in Seweto camp.

Every day was a challenge to earn a decent living in an unfamiliar place.

“When I got here I didn’t know anybody. Life was up and down. When you’re new to a place, you face many challenges,” Yussuf told Radio Ergo.

He tried several jobs from the waiter, cook to porter until he finally landed a job at a bakery in town.

Over nine years, he put away small portions of his salary as savings until eventually, he had saved enough money to buy the bakery where he was working.

“I always had the ambition to stand on my own feet and become stable. To fulfill that dream, you need be patient with all the challenges,” he said.

“I had $2,000, but was short of $1,000 more I needed to buy the bakery. I signed an agreement with the owner to pay him the remainder little by little, and in this way I started my first business,” he said.

The bakery grew and he employs 14 people from the host and IDP camp communities.

Yussuf has moved his family of seven out of the camp into a two-bedroom house in Waberi neighbourhood, rented for 500,000 shillings ($30). “Living in my own house, I now feel comfortable,” he boasted.

Meanwhile, from Bala’d in southern Somalia’s Middle Shabelle region, Abdullah Nur Moalim fled to the north in 1994 and also ended up in Buhodle, after spending 10 years in Bossaso.

Like Yussuf, Abdullahi has raised himself up to become an independent businessman. He owns a workshop in town and has bought a house.

“My family and I came to Buhodle in 2004 with nothing,” Abdullahi told Radio Ergo. “Initially I was living in the camp before moving to a rental house. Now I live in my own house.”

Abdullahi commends the host community for being hospitable and allowing IDPs to integrate with them without discrimination.

According to Radio Ergo’s local correspondent, around 50 families have moved out of the camps in the town to integrate with the local community.

Buhodle hosts two IDP camps, Seweto and Shangale, set up in 1995. Most of the IDPs survive doing odd jobs in the town.  Support from aid agencies is minimal.