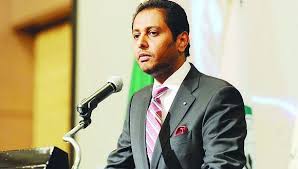 Jeddah, Dhu-AlQa’dah 25, 1439, Aug 7, 2018,  — Ambassador of the Republic of Djibouti, Ziauddin Bamakhrama , who is also Dean of the Diplomatic Corps accredited to the Kingdom of Saudi Arabia, stressed that the Kingdom has ever been a country that enjoys free sovereign decision, since its establishment by King Abdulaziz bin Abdulrahman Al Saud, adding that the Republic of Djibouti respects the wisdom of the leadership in the Kingdom and its rights to take national, regional and international decisions.
Djibouti and the Kingdom will always stand and take the same line and ditch various issues, he said, pointing out that this position is the same as the position of the President of Djibouti Ismail Omar Guelleh, citing his country’s severing diplomatic relations with Iran, as well as taking part in the Coalition against Terrorism.
In conclusion, he expressed appreciation of the President of Djibouti Guelleh and the Custodian of the Two Holy Mosques King Salman bin Abdulaziz Al Saud for the level of bilateral relations and close understanding binding the two countries.
— SPA