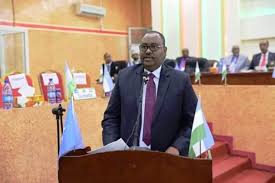 Puntland State of Somalia has confirmed that it won’t attend in the upcoming National Consultative meeting between Somalia’s Federal Member States and the Federal Govt in Mogadishu.

On his remarks on the commemoration of Somalia’s independence in Galka’ayo, Saed Abdilahi Deni confirmed that his verdict to stay away from the Consultative meeting is in line with the decision of Puntland parliament.

Saed Deni has been a vocal critic to Benadir senate seats. Deni said that plan is intended to demolish the Upper House and the Federal System.

He has also strongly opposed the postponement of Federal polls by several months.

It was in 2018 when council met in Baidoa due to rift between Somalia’s Federal Govt and the Federal Member states.

The meeting will be discussed on the upcoming polls, security, economy, war on terrorism, and review the process of the constitution.

The Int’l community urged president Farmajo to hold a meeting for the member states to address on issues such polls, security and the fight against the coronavirus.