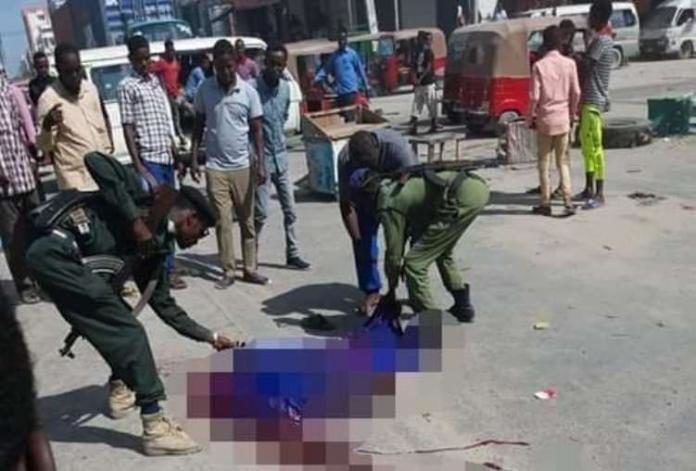 A young auto rickshaw driver has been shot dead on Friday by a Somali government police officer in Mogadishu as series of police killings already sparked public anger.

According to witnesses, Mohamed Abdullahi Hassan, 22, was shot by a police officer at a security checkpoint at Sei Piano neighborhood in Mogadishu’s Hodan district.

“The officer and the young driver exchanged shout. Suddenly the soldier pulled his AK47 and shot one bullet at the driver. He has died instantly,” Ali Abdurahman, an eyewitness told.

The driver was taking an expectant mother from the neighborhood to a nearby hospital for delivery when the quarrel engulfed between him and the soldier resulting the gunshot.

The local community in Sei Piano gathered at the shooting scene while the body of the young man with blood everywhere was still lying on the sandy road.

The killings by the police in Mogadishu increased in the past three months barely after the Mayor of Mogadishu announced a security operation in the capital.

On May 8, a police officer shot and killed another tuk tuk driver in Tarabunka after the officer got angry at the driver who drove past a security checkpoint.

Last month, another police officer killed a 24-years-old tuk tuk driver who was also a soccer player with the Geeska Afrika Football Club in Hawlwadag district.

On April 1, protests rocked the streets of Mogadishu after a police officer shot dead another driver of tuk tuk and his passenger. The protests that day led to a running battles on the streets resulting the police to shoot and kill seven more civilians on the same day.

In a meeting on Thursday, elders drawn from Mogadishu clans strongly deplored the increasing violence by the government soldiers against civilians in Mogadishu.

The elders called the government to ease pressure and remove roadblocks and arrest police killers.

“We want the government to listen our call before the situation becomes uncontrollable,” Suldan Wabar who hosted the clan elders meeting said.