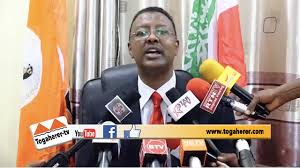 This comes as the debate for the registration of new political parties intensifies with the opposition parties arguing it was way ahead of schedule.

Ibrahim Mahdi Bubaa who before last year was the spokesman of the opposition party Wadani says it is the will of the people to open the gate for new political parties.

MP Bubaa alleged that the majority of SL people welcomed the move of President Bihi for early registration of political parties with enthusiasm.

According to the country’s constitution, SL is stipulated to have three political parties at a time.

The last such election was held in November 2012.

President Bihi declared the move in his annual speech to the parliament last week.

He argued that the was way around the impasse over the electoral commission which raged in the country for the past two years.

However, the opposition groups in SL have interpreted the move differently and traded accusations against Bihi alleging that the move is intended to abolish the political parties in a bid to hang on to power.

The opposition groups called for early presidential polls this year in response to the move of the president which angered them.

The president has only finished half of his 5 year term in office.