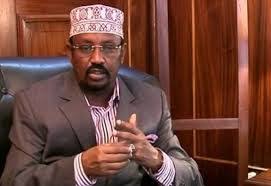 Kenyan parliamentarian has lauded Somaliland gov for restoring law and order to its territory. Mr. Elias Bare Shill has said that Somaliland gov and its populace have gained the reputation for maintaining stability and peace for its citizens as well as Somalia speaking territories in the Horn. Mr. Elias who is a Kenyan member of parliament has said that he shares the views that Somaliland should be recognized. He stated that there was a zeal for Somalia unity as the flag with the five stars in the middle was the only flag for all Somali speaking territories during the colonial era. The five Somali speaking territories include, Italian Somalia, British Somaliland, Reserve Area dubbed Ogadenia which was given to Ethiopia by the British, the NFD which is under Kenyan annexation, and the French speaking territory of Djibouti. Mr. Elias is elected from NFD and is member of Kenya’s national assembly. The Kenyan MP has said that once Somalia descended into chaos, Somalilad recaptured its lost independence by declaring a unilateral secession. He also disclosed that Somalia which has been without central government is the only problem for Somaliland’s recognition efforts. He said  loud and clear that this is the right time for Somaliland to gain international recognition from the world as Somalia’s disintegration continues. The MP stated clearly that any one who opposes Somaliland recognition is against wish and will of Somalia to stand on its feet once again. He cited that those who are yearning for Somalia unity must restore peace to your territory and provide welfare to your community. He told that unity will come as EU came together. He said that he personally believes that it is the time for Somaliland to get its well deserved recognition from the world. Mr. Elias Bare Shill has added that he is proud of Somaliland progress and promised to pay a courtesy visit to Hargeisa once Kenyan airways starts direct flights from Nairobi to Hargeisa.