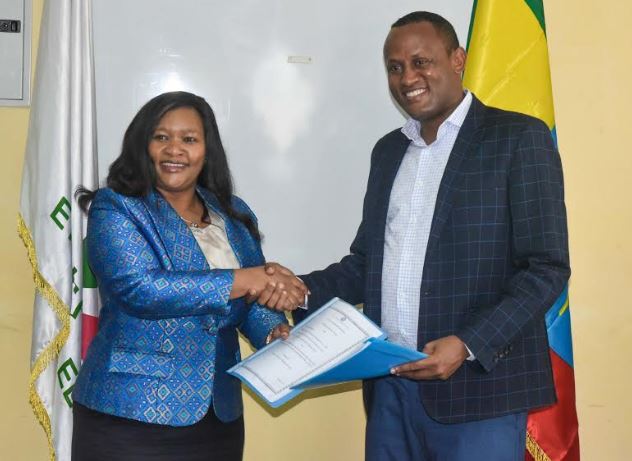 The signing ceremony of the agreement took place over the weekend and was attended by KenGen’s Managing Director and CEO Rebecca Miano, and other KenGen leaders who witnessed the signing of the deal with Ethiopian Electric Power (EEP) CEO Dr. Abraham Belay.

Miano said the award will bolster the company’s diversification strategy.

“As we extend our services to Ethiopia, we are leveraging on our expertise, in-depth knowledge of the African Rift Valley and close to four decades of successful drilling experience,” she said.

Speaking during the signing ceremony, Belay said Ethiopia had tried to venture into geothermal development in efforts dating as far back as 1981 but was yet to make a commercial breakthrough.

“Currently we have some geothermal drilling rigs that are idle and now broken down and therefore the need to purchase new ones,” said Belay adding, “we will be delighted to have you build the capacity of our people to be able to manage the equipment and run the power plants even after you exit the sites.”

The contract, which is for the implementation of drilling rigs and accessories as well as rig operation and maintenance for drilling geothermal wells at Aluto, Ethiopia is financed by the World Bank through a loan to the Ethiopian Government to the tune of USD 76,801,344 (about Sh7.6 billion)

The project will be implemented in two phases; phase I which is purchase of drilling rigs and Phase II which entails provision of drilling services. KenGen is supplying about 30 percent of the component of Phase II which translates to about USD 6.2 million (about Sh620 million).

“Everywhere you go in the world, green energy is the future. As KenGen, we are alive to the need to provide renewable energy services to minimise and maintain low carbon footprints. We are glad we are doing exactly that by offering drilling services to EEP for geothermal energy,” said Miano.

KenGen has invested in experts with considerable experience in geothermal exploration and drilling and will build capacity of teams from Ethiopia who will be working on the project. The firm also has a Geothermal Centre of Excellence which conducts training programs for local and international students.

“Some people may argue and ask why we are going to Ethiopia and yet we have not fully developed the local geothermal resource? The answer is simple, when you light your brother’s candle, you create not less but more light. That is what we are setting out to do for mother Africa. We want to light up more villages in Africa and prepare the continent for the next phase of industrialization,” said Miano.

Kenya is Africa’s number one geothermal energy producer and among top 10 in the world.

The country has a geothermal installed capacity of 685 MW with an estimated potential of 10,000MW along the Rift Valley. Currently, this potential is being harnessed in Olkaria, Menegai and Eburru fields.

During the company’s last financial year, revenue generated from geothermal power plants increased from Ksh 16.1 billion in 2017 to Ksh 17.1 billion in 2018, which was a growth of six percent.

The other consortium partner in the deal is the Shandong Kerui Group. Both wield extensive experience in manufacture and supply of geothermal development equipment