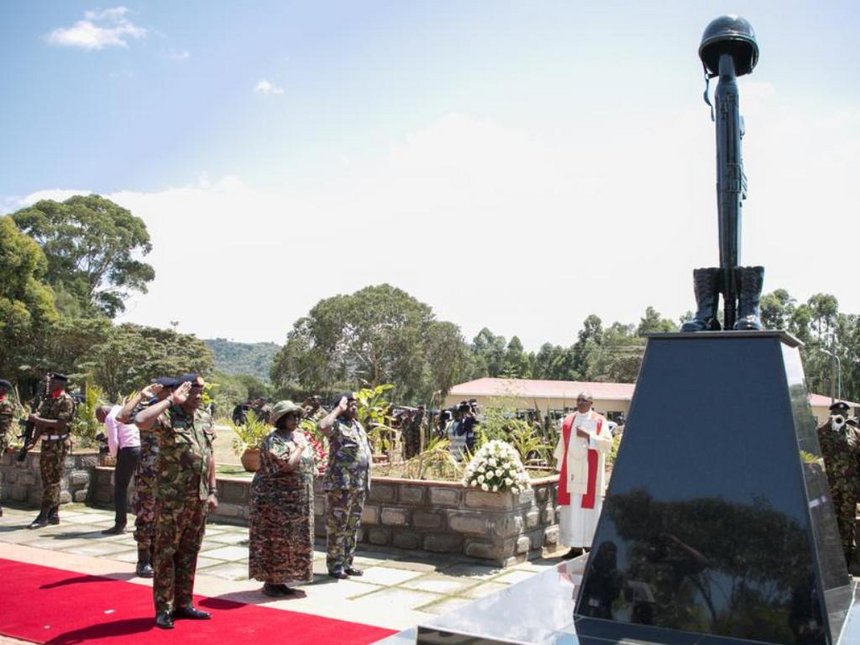 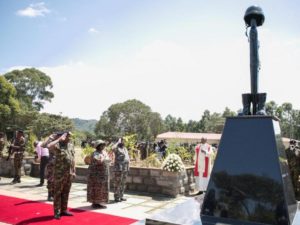 President Uhuru Kenyatta on Saturday affirmed that Kenyan soldiers will maintain their presence in Somalia until the troubled country achieves peace, stability, and security.

The President said Kenya Defence Forces (KDF) working under AMISOM will not be withdrawn until all terror networks are fully neutralised.

“We went to Somalia in 2011. We shall continue our presence in the country until the restoration of full security in Somalia,” the president said.

The Head of State spoke during the 7th annual KDF Day at Kenyatta Barracks in Gilgil, Nakuru county on Sunday.

KDF Day is marked to commemorate Kenya’s fallen heroes and heroines who died while defending and protecting the sovereignty, territorial integrity, peace and freedom of the country.

The president said Kenyans are proud and appreciative of the proactive role played by KDF in security operations and peace initiatives in the region especially in the fight against terrorism, a challenge that continues to create fear and despondency among populations.

“Kenyans are proud of their soldiers and the professional, patriotic and disciplined manner they have handled themselves,” the Head of State said.

The President said Kenya cannot let down its guard until the complex transnational terror networks operating in the Horn of Africa region are completely removed.

Uhuru said there is need to ensure that Kenyan borders remain secure, a role the KDF has prayed with pride, courage, and determination.

He said Kenya’s continued contribution of troops for peace missions was indicative of the government’s commitment to peace and security in the region and beyond.

The president called on soldiers to rededicate themselves to protect the sanctity of human life, remain united and maintain their high degree of integrity and accountability.

He encouraged KDF to continue cooperating with other agencies in times of disasters and emergencies.

Uhuru acknowledged the role of KDF in supporting the police force whenever a need arises.

During the ceremony, wives of gallant soldiers who had paid the ultimate prize while in the line of duty were presented with certificates and mementos in recognition of their brave spouses.

Also presented with the mementos and certificates of appreciation were serving soldiers celebrated for their heroic roles in various undertakings of the military including rescue missions, sabotaging enemy operations, and sports among other successes.

The new processor is the latest addition to the expanding Kenya Ordinances Factories Corporation and will be processing 1000 tonnes of food at its peak.

Currently, it is processing 90 tonnes of supplies per day. Most of these are from food crop farmers in Nakuru, Nyandarua, Narok, Elgeyo Marakwet and Nyeri.

Uhuru lauded the KDF for setting the pace in the food value addition sector, a key area with huge potential to create wealth and millions of jobs, a key component of his administration’s Big 4 Agenda.

“I am happy to note that the KDF is actively supporting the Big 4 vision. This initiative by KDF addresses the pillars of food security and manufacturing.”