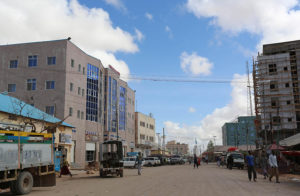 Nairobi, September 21, 2018–Police in Puntland, a semi-autonomous region in Somalia, should rigorously investigate the killing of Abdirisak Said Osman, a reporter and photographer with the privately owned radio station Codka Nabada, the Committee to Protect Journalists said today.

Abdirisak died on September 19 in the city of Galkayo while receiving treatment for injuries sustained in a September 18 attack, according to a statement by the Media Association of Puntland (MAP) and Codka Nabada director Ahmed Mohamed Ali, with whom CPJ spoke. MAP chairman Mohamed Dahir told CPJ today that the motive for the attack was still unclear.

“Authorities in Puntland must leave no stone unturned in investigating the killing of Abdirisak Said Osman. They should quickly establish if his work as a journalist was in any way connected to his death and prosecute those responsible,” said CPJ sub-Saharan Africa representative Muthoki Mumo. “A rigorous and transparent investigation will go far in demonstrating Puntland’s commitment to ensuring the safety of journalists.”

In its statement, MAP said that Abdirisak was on his way home from work when he was attacked by a group of unknown people at around 11:00 p.m. on September 18. Police told MAP that the journalist was stabbed with knives and beaten with sticks and died of internal bleeding, according to the same statement.

Osman Abdi Yusuf, Puntland’s deputy commander of the Criminal Investigations Department, told CPJ today that six people had been arrested in connection to the attack on Abdirisak. However, he declined to provide substantial comment on the case or the motive of the attack, saying investigations were still ongoing.

MAP said it rejected “conclusions or assumptions” that the attackers were “bandits,” pointing out that the journalist’s phone had not been stolen. The organization urged authorities to investigate “whether his profession could have been the motive.”

Codka Nabada director Ahmed Mohamed Ali told CPJ that Abdirisak, 30, had recently reported a series of stories on insecurity in Galkayo, interviewing members of the public on their concerns about criminal gangs and terrorists. The director said that some of those interviewed had identified militant group Al Shabaab as being the cause of insecurity. However, Ahmed said that he did not know whether the attack on Abdirisak was connected to this reporting, saying that investigations were still ongoing.

According to CPJ’s research, Somalia–including semi-autonomous Puntland and the breakaway region of Somaliland–has some of the highest levels of impunityfor murders of journalists.