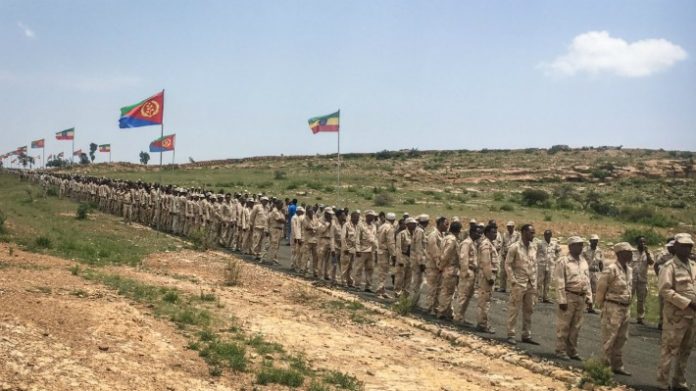 Eritrea is using secondary schools to channel students into indefinite service in its military and civil service, according to Human Rights Watch.

A new report by the US-based international organisation claims that thousands of young people are being pushed into military service before they have finished school.

Some children are subject to “regular physical punishment, military-style discipline, and forced labour”, the report says.

In addition, schools are staffed by conscripted teachers, who are given no choice of what or where to teach – or whether they want to teach at all.

Indeed, the study found “that many Eritreans have spent their entire working lives at the service of the government in either a military or civilian capacity”.

Together, these policies are forcing many young people out of Eritrea, Human Rights Watch reports.

Why does Eritrea have military service?

Conscription was introduced after the country gained independence from Ethiopia in 1991, following three decades of armed conflict. The idea of national service was popular at the time.

Crucially, conscripts could return to their usual lives after serving for an 18-month term.

However, when war broke out once more against Ethiopia in 1998, a great number of former conscripts were recalled to Sawa, a military training camp near the Sudan border, before being sent to fight. Many of the 20,000 Eritreans killed in the conflict were young conscripts.

Although a peace deal with Ethiopia was signed in 2000, it wasn’t until 2018 that an agreement took Eritrea off a war footing, says the BBC.

On 2 August this year, Eritrea marked a quarter of a century since the introduction of national service, during which time 50,000 people have been enrolled in the military.

Both men and women aged between 18 to 40 are meant to serve, but the majority of conscripts are young people plucked from their last years at school.

How bad is the situation in Eritrea?

“Significant numbers” of conscripts have remained in open-ended conscription, “some for as long as 20 years”, according to Amnesty International.

Reporting on the situation in 2017-18, the human rights organisation says that “children continued to be subjected to military training” and “women, in particular, faced harsh treatment in the camp including sexual enslavement, torture and other sexual abuse”.

The Global Slavery Index estimated last year that 451,000 Eritreans were living in conditions tantamount to slavery, mostly in the form of imposed military or civilian service.

Citizens are also subject to “restrictions on the rights to freedom of expression and of religion”, says Amnesty, which adds that arbitrary detention without charge or trial has “continued to be the norm for thousands of prisoners of conscience”.

Eritrea is the “most secretive, repressive state in Africa”, says Martin Plaut, a senior researcher at London’s Institute of Commonwealth Studies and author of Understanding Eritrea: Inside Africa’s Most Repressive State.

“You are at the whim of the regime who, if you step out of line, can lock you up indefinitely. There are no courts to whom you can appeal…people are just in despair,” Plaut told US-based news site The Globe Post.

How many Eritreans have fled?

Almost 15% of the population has left the country since the 1998 war, says Human Rights Watch.

In 2013, the UN Special Rapporteur on Eritrea reported that between 3,000 and 4,000 Eritreans were fleeing every month. “The current human rights picture is desperately bleak. People feel trapped in a long hopeless situation as they see no end to it to the point that they take the irreversible decision to flee, forcing them on the road to exile,” said Sheila  Keetharuth.

This week, the UN refugee agency told the BBC that almost 1,000 new arrivals, most of them from Eritrea, was arriving each month at a single refugee camp in Sudan – offering a glimpse into the scale of the problem.

And many Eritrean refugees face further human rights abuses both while in transit and in destination countries.

Although many flee to nearby countries including Libya and Sudan, Eritreans heading to Europe risk “arbitrary detention, abduction, sexual abuse and ill-treatment”, says Amnesty.