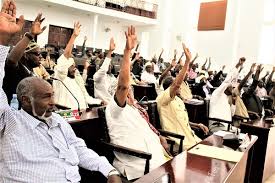 The House of Elders-Somaliland’s Upper Chamber of parliament on Sunday appointed 29 members of the parliament delegated the responsibility of evaluating the extension for the House of Representatives- Lower Chamber whereby its term has expired.

The decision comes after the parliament election which was supposed to transpire at the end of this year was postponed.

The president of Somaliland Musa Bihi Abdi addressed an official letter to the House of Elders apprising that the House must extend the tenure for the national assembly.

The House of elders voted the 28 members and passed with unanimous vote.

Somaliland democracy hit a bottleneck following the recurring squabbles between the parties and the government over the selection process of the newly approved national election commission.

Opposition parties have once demanded that unless the sitting NEC is disbanded and its replacement formed that they won’t participate.

The EU intervened the political standoff between the parties and the government and a deal was brokered by EU envoy to Somalia Honorable Berlanga.

Having the parliament passed the NEC members, Wadani party in Somaliland rejected the move and accused the president of including controversial figures in his nominees.

The current parliament which was elected in 2005 saw several extensions which took place under three administrations headed by Riyale, Silanyo and Bihi.