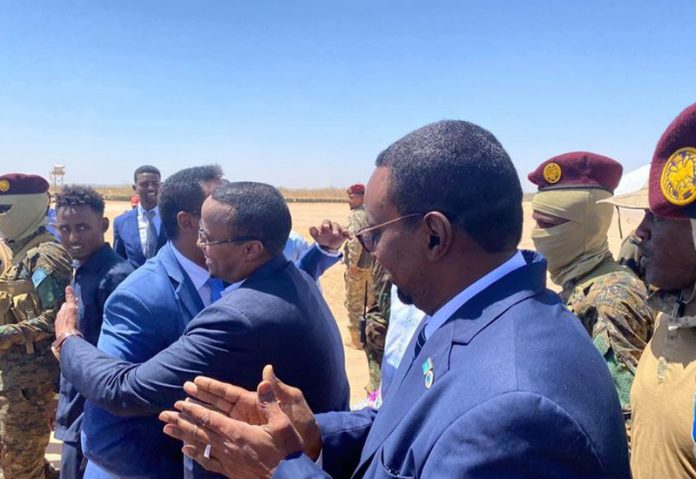 Hirshabelle President Ali Gudlawe arrived in Baladwayne on Sunday for the first visit to the central Somalia town since his election in November 2020, shortly after an exchange of gunfire had been reported near the city’s airport.

He was received at Ugas Khalif Airport on the outskirts of Baladwayne by his deputy Yusuf Ahmed Hagar, Hiran governor and other local officilas.

Security was beefed up before his arrival with main roads closed. Troops including military, special forces and police had been deployed across the streets. The leader of local clan militias against Hirshabelle authorities warned that Gudlawe would be held responsible for consequences should he arrive in the restive town amid a tense military buildup.

It comes days after the airlift of hundreds of special forces to the town sparked an outcry and calls for their immediate removal. Regional politicians pointed to attempts by Villa Somalia and ex-spy boss Fahad Yasin to rig parliamentary elections scheduled to be held in the town.

Clan militias earlier foiled multiple attempts by Gudlawe to arrive in the town and residents greeted his plans with massive protests in Baladwayne.