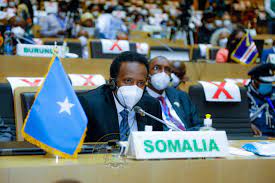 Somalia’s President Mohamed Abdullahi Farmajo on Saturday boasted about achievements made in the fight against Islamist militant group Al-Shabaab during a speech at the African Union Summit in Ethiopia’s capital, Addis Ababa.

Farmajo claimed that his government had achieved substantial gains against Al-Shabaab and called for a unified action by the African Union member states against the group and other militant networks in the continent.

In his speech, he expressed his government’s readiness to take over full responsibility for the security of the country from the African Union peacekeepers and implement the terms of an agreement recently signed with the AU on a transition plan.

On Saturday, Somali President Mohamed Abdullahi Farmajo met with his Ethiopian counterpart Abiy Ahmed to “discuss how to further strengthen the political, security and economic relations between the two states”, according to his media office.