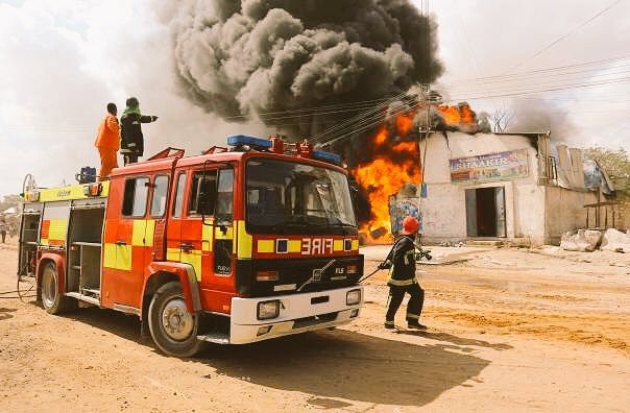 Fire engines play an undoubtedly crucial role in our society, facilitating the work of firefighters and allowing hundreds of lives to be saved every year.

But what happens to these enormous vehicles once they reach their sell-by date and have to make way for a newer, shinier, better-equipped model?

Many brigades across the nation simply scrap their old engines, but Suffolk Fire and Rescue Service has been working to ensure their appliances get a second bite of the cherry.

The service has a partnership with Angloco, a Yorkshire-based company whose primary function is to manufacture fire fighting vehicles and their on-board equipment.

One of Angloco’s other operations concerns refurbishment, which sees retired engines purchased back from fire services, reconditioned, and sent to grateful recipients across the globe.

What happens to Suffolk Fire and Rescue Service engines when they are retired? Picture: Nick Butcher

Among Suffolk fire’s success stories is seeing a former Lowestoft and Leiston appliance assigned to Somalia, where it now serves communities in Mogadishu.

“Our refurbishment work really ramped up when the Terrorism Act was introduced in 2000, and again after 9/11,” explained Steve Jubb, product manager at Angloco.

“We work with the government to ensure fire engines don’t get into the wrong hands. Years ago they were being sold at auctions open to any member of the public.

“We saw some cases where people were buying them and driving them around town, using them as limousines to pick up their friends – fortunately that has all stopped now.”

The partnership with Angloco is not the first time Suffolk fire’s work has been far-reaching, having supported initiatives including Operation Florian.

Suffolk appliances and equipment have been sent to Macedonia and Bulgaria as part of the charity’s efforts to help fire and rescue services in countries emerging from conflict.

As more and more engines are given a new purpose abroad, Mr Jubb says the common goal remains the same.

“When engines come to us they’re incredibly tired, but we’ll do our best to get another five or six years out of them,” he added. “A lot of them are ready for scrapping and we have to decide whether it’s worth sending them thousands of miles away.

“What we can save, we will. As long as we are contributing to saving somebody’s life from a fire, that’s what matters.”