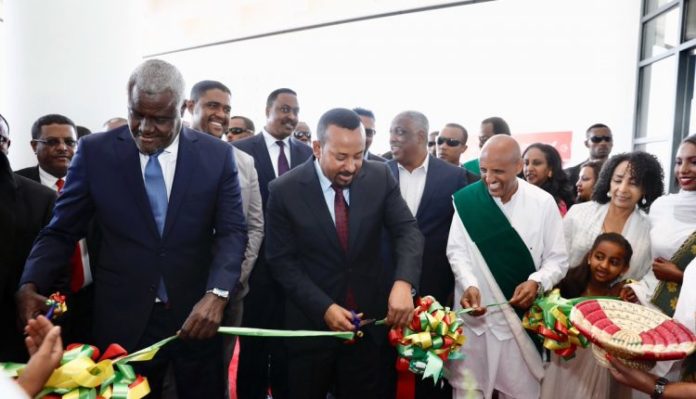 The Addis Ababa Bole International Airport passenger terminal expansion project was built at a cost of 363 million US dollars on 74,000 square meters of land.

The Prime Minister on the occasion said “Ethiopian Airlines is the pride of Ethiopia as it embodies the philosophy of Medemer.”

Emphasizing the greatness of the airline rests in the synergistic work of all members of the organization, he called upon staff members to take their ownership to another level by buying into shares of the airline.

He further affirmed the support of his administration to further strengthening the airline, according to Office of the Prime Minister.

Group Chief Executive Officer (CEO) Ethiopian Airlines, Tewolde Gebremariam for his part said that the expansion will raise passengers handling capacity of the airlines to 25 million per year.

Built on 40,000 square meters land, the hotel has 373 rooms, 4 restaurants, banquet hall to accommodate 2,000 guests, among other facilities. The hotel will generate 400 jobs.

Prime Minister Dr Abiy also visited the aviation academy of the airline; the maintenance and aerospace manufacturing site, cargo and logistics center as well as the simulation training site where operators demonstrated the A350-900 simulator.