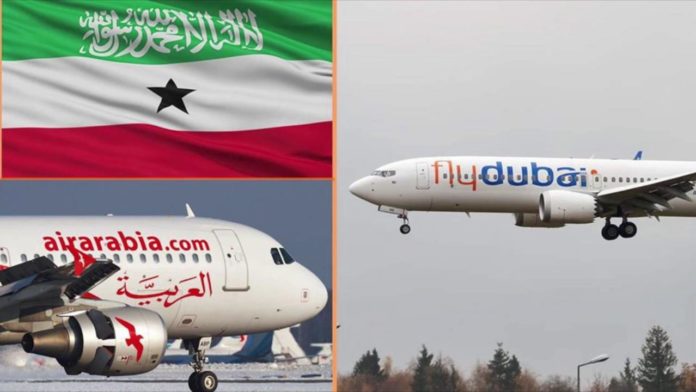 According to a televised report by the Somaliland-based Horn Cable TV, the government of the Republic of Somaliland notified the head offices of FlyDubai and Air Arabia that they were no longer welcome on Somaliland soil.

Both airlines stopped flights to Somaliland on the outbreak of the coronavirus pandemic.

But, also, the suspension of the airlines’ flights to the unrecognized but established, thirty-year-old democracy in the Horn of Africa, coincided with a Somalia proclamation that it banned international flights coming to ‘Somalia’  which, to Villa Somalia, still included Somaliland airspace.

FlyDubai, particularly, earned the displeasure of Somalilanders when, on 19 March, it cancelled an in-coming flight on mid-flight and on Somaliland airspace returning passengers to Dubai. Somalia celebrated claiming that it was on its behest that landing in Hargeisa was denied.

It is noteworthy that the UAE suspended all international flights as a precautionary measure to limit the spread of the virus which had taken a toll in the Gulf a country.

Critics, on the other hand, are already pointing an accusatory finger at the government action claiming that the ban was neither called for nor appropriate at this juncture of time and in light of the prevailing health concerns.

They also express fears that the action may be construed widely as a nepotistic gesture leaving the field to Ethiopian airlines whose Somaliland agent happens to be a nephew of His Excellency the President and a longtime rival of one of the agents.

Ethiopian Airlines never stopped its flights to Somaliland defying the repeated calls of the international community-supported, weak Mogadishu government which claims jurisdiction over a country of whose affairs it has the least control of.

The Somaliland ban bares the hollow claims of Villa Somalia – to say the least, as that country cannot overrule the Hargeisa ban in any way – now or at a future point.

Neither airline traded with Mogadishu or ever landed at its airport.